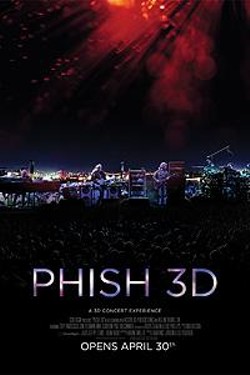 The movie features never before seen cover songs, and intimate footage of the band backstage and in rehearsals. Filmed in October 2009 at the band's Festival 8, more than 40,000 devoted fans watched as Phish combined two of their most beloved traditions - the multi-day festival and the Halloween album "costume." The band's highly anticipated "musical costumes" are concerts involving the performance of an entire album by another artist-in this case, Phish covered the Rolling Stones' album Exile on Main St. Phish 3D also features songs from the band's first ever full-length acoustic set, as well as performances taken from the six additional sets.

Phish is not showing in any theaters in the area.