Rock through the first five years 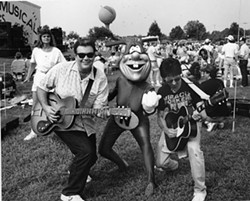 If, as historians advise us, eras have their defining moments, then so, too, do smaller periods contain their own seeds of identity and character.

Looking back at the first five years of Creative Loafing, during which I served as the paper's music editor, I get the sense that there were a number of "defining moments." Viewed as separate points on a time line or as linked incidents on a continuum that has now stretched to 10 years (and counting), these moments do seem to paint CL in a myriad of hues and shadings. Put metaphorically, if Charlotte's daily newspaper is black and white (and, like the musty joke adds, "read all over"), then this city's alternative weekly is as colorful and rich in depth as a Hockney painting. And at times, suitable for framing.

One such event that will always represent, to me at least, what CL -- as an alternative to the mainstream -- was all about transpired in January of 1990. For weeks Charlotte had been fudging its undies over Tom Cruise and the filming of Days Of Thunder at the Speedway. The Observer in particular was a lighter shade of brown at the time, logging the star's real and imagined movements around town as if he were Mother Teresa touring local leprosy wards. Imagine the chagrin, then, of the daily paper when we reported from the front lines and even buttonholed Cruise for an exclusive interview.

Seems that the Belmont Playboys got the wrap party gig, and the band smuggled me in as their roadie. I duly reported the arrival of Robert Duvall, Johnny Cash, June Carter Cash, Waylon Jennings and Jessi Colter, not to mention the impromptu jam session involving the Playboys and the Duvall entourage (Cash was particularly smitten by the band's version of his "Rock & Roll Ruby"). More importantly, and sensing my duty as a journalist, I engaged Tom Cruise for our "exclusive interview." The entire interview went thusly: "What did you think of the Playboys, Tom?" "Man, they were rockin'!"

Yessir, Creative Loafing (not to mention its worldly music critic) had finally arrived into high society. Of course, we had to come through the back door with the servants and hired help, but still ...

Damn. Time flies. Here it is, seven years later, and I'm browsing a Tucson record hole when I spot a CD called Wolf Patrol by none other than my ad hoc employer, the Belmont Playboys!

Even though talent naturally rises, it's hard not to feel like CL had at least a small hand in boosting the band's career. One of our prime directives from the git-go was "support local music." Before our first issue was published in April of '87, editor John Grooms and I had lengthy discussions over what role the paper should play with regards to the area's music scene. It had always rubbed both of us the wrong way that the media powers-that-be (including Charlotte's candy-ass radio stations) tended to treat local bands with the same kind of embarrassed condescension usually reserved for that eccentric, flamboyant relative who turns up tipsy and in a feather boa at the family reunion. To that end, we set out to champion our rock 'n' roll underground -- what the hell, let's crash the party and get drunk with the rest of the freaks! -- and challenge the rest of the populace to keep up with us.

A poorly kept secret around the Loafing office is that Break, the entertainment tab started up in 1987 by the Observer in order to complete directly with CL for advertising revenue (let's face it, it sure wasn't for prestige), tried to hire me as a music writer. As the editrix schmoozed me over instant coffee and stale donuts, I inquired as to the level of music coverage Break had in mind.

"There's a Billy Joel show coming next month to the Coliseum. I think our readers would enjoy a 750 word profile on the man."

When I mentioned that Antiseen and Fetchin Bones had gigs coming up too, I was met with a blank look. 'Nuff said.

I'll admit it, we were as arrogant as we were hip. Case in point: taking it upon ourselves to paint Charlotte's Springfest celebration in its true colors -- a crashing bore or a yuppie circle jerk -- we proceeded to muscle a local rock and blues stage into the annual goings-on for a couple of years. When Springfest organizers tried to water down our efforts, we opted out entirely and put on our own Nightfest (the name we judiciously picked over "Counterfest" and "Screw You Springfest") in '90, staging bands after sundown in three clubs during Springfest weekend. The idea seemed to fly despite some territorial pissing among competing club owners (don't ask), so in '91 we put the call out en masse and wound up with three nights, seven clubs and 27 local acts. The entire spectrum of Charlotte talent was showcased: folk, blues, heavy metal, alternative, punk, psychedelic, etc.