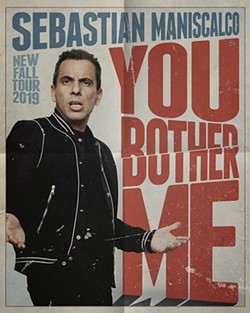 When: Wed., Sept. 25, 7-9 p.m. and Thu., Sept. 26, 7-9 p.m. 2019
Phone: 800-745-3000
Email: Maegen@personalpublicity.com
Price: $41.75
sebastianlive.com/home/#home
Fresh off a wildly successful, two-year-plus run on his Stay Hungry Tour, Billboard’s inaugural Comedian of the Year Sebastian Maniscalco is back with the You Bother Me tour, which is currently set to visit 15 cities in the U.S. and Canada throughout its fall run. Touted as ‘the comedian’s comedian” by People, Maniscalco finds himself “at the vanguard of a live comedy revolution” according to Pollstar. And the man “NBC Nightly News” called “comedy’s new superstar” is showing no signs of stopping as he revealed the new tour during a visit to CBS’ “The Talk.”