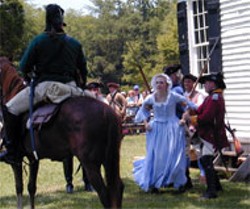 July 06 - Wednesday
John Smith, that taxi driving bigamist, rides again as CP Summer Theatre presents Caught in the Net through July 16. This sequel to Run for Your Wife won the Olivier Award for British farceur Ray Cooney. We've telescoped 16 years ahead in time, and the children of Smith's two marriages have met via the Internet. Naturally, the morally conservative bigamist must contrive to keep the sibs apart. Dennis Delamar, who starred in the Charlotte premiere of Run for Your Wife years ago, directs CP's summer comedy with Carey Kuglar as John and consummate comediennes Polly Adkins and Daryl Gerber as his duped wives. The final comedy at Pease Auditorium runs Wednesday through Saturday nights at 8pm with a 2:30pm Sunday matinee on July 10 and a 7pm performance on Tuesday, July 12. All tickets are $16. Call 704-330-6534. (Tannenbaum)

It's a Doomed Dane Deconstructionist Doubleheader at SouthEnd Performing Arts Center as Off-Tryon Theatre Company brings out The Hamletmachine and Rosencrantz & Guildenstern Are Dead in rolling rep through July 30. Tom Stoppard's infamous R&G presents the famed Shakespearean assassins, played by TJ Derham and Phillip DeVaul, leading us through an absurdist labyrinth with reference points that include Prince Hamlet, Samuel Beckett and declaiming actors. Director John Hartness seasons it with early British Punk flavorings. Tomorrow night, Heiner Müller's The Hamletmachine has its Charlotte premiere at SPAC, padding less than 10 lines from the Bard's great tragedy with live music, video, spoken word poetry and topical spoutings in a performance art experience calculated to provoke. Cody Harding, Karen Surprise and Patrick Duke are among the mechanized notables onstage, directed by Chris O'Neill. All performances of R&G begin at 8pm on July 6, 8, 14, 16, 20, 22, 23, 28 and 30. Hamletmachine alternates with 8pm showings on July 7, 9, 13, 15, 21, 27 and 29. Special Saturday Machine matinees are added at 3pm on July 16 and 23, creating two daylong "Hamlet-a-Thons" that can be consumed with a $25 ticket admitting you to both shows plus a 10am concert reading of Hamlet performed by a combo cast from both of the other productions. Otherwise, single tickets are priced at $15. Call 704-332-5300. (Tannenbaum)

One of the most fun shows to hit the Blumenthal stage in a while finishes up its Charlotte run today through Sunday. Hairspray, the Tony-winning Broadway hit based on a John Waters film, is a brash, fast-moving and darkly hilarious look at a teenager in early-60s Baltimore who crusades to integrate the city's hippest after-school TV dance show. In this production, it all works — the characters, including J.P. Dougherty in the Edna Turnblad role created on film by Divine and on Broadway by Harvey Fierstein; the terrific sets and costumes; the songs; the superb choreography and the 60s-centric messages. This show delivers the goods. The final performances are today and Thursday at 8pm, Friday and Saturday evenings at 8:15pm, Saturday and Sunday matinees at 2pm, and Sunday evening at 7:30pm. Tickets are $25-$80. Call 704-372-1000. (Grooms)

July 07 - Thursday
Tommy Foster, who made such an agreeable splash as the hero of Actor's Theatre's tick... tick... BOOM! back in April, returns to the scene of his triumph in a confessional cabaret mode. Foster's one-man show, The METHod to My Madness, had a successful test drive in New York in the fall of 2004 and garnered acclaim from Back Stage magazine and Playbill.com. Using a blend of narrative and music, Foster takes us through the club world and recounts how a wholesome gay Southern boy became enmeshed in a harrowing crystal meth addiction. Foster retraces his journey on Thursdays through Saturdays, beginning at 9pm at 650 E. Stonewall Street. All tickets are $20. Call 704-342-2251. (Tannenbaum)

july08friday
"Women — We are Beautiful rich creatures." So says poet sunRay, who will be featured this evening in A Celebration of Women Through Poetry & Music, part of the Summer Art & Culture series at Pura Vida Worldly Art. Spiritual singer and performer Saundra Porter Thomas and singer and artist Carol Marley also appear. The free event is from 7-10pm; the performance starts at 8:30. Pura Vida is at 1521 Central Avenue. For more info, call 704-335-8587. (Vespa)

The Levine Museum of the New South is throwing a spicy Cajun Traditions House Party. The Miller Band from Louisiana and our own Carolina Gator Gumbo will turn up the musical heat with Cajun music that's custom-made for dancing. There's also a Cajun food buffet, dance lessons, stories about Cajun culture and plenty more. It all begins at 5:30pm. Tickets are $15 for museum members, $20 for non-members and $5 for kids under 12. For reservations or more details, call 704-333-1887, ext. 501, or visit www.museumofthenewsouth.org. (Shukla)

The Charlotte Film Society's Second Week series continues today at the Manor Theatre. This month's lineup consists of Academy Award Nominated Short Films, a roundup of seven of the nominees (including the two winners) for the most recent Best Animated Short and Best Live Action Short Oscars; Gunner Palace, a documentary about US troops stationed in Iraq; Look at Me, a French film that took Cannes' Best Screenplay award for its look at the travails of an overweight, struggling singer; and Turtles Can Fly, a humanitarian drama (billed as the first feature film made in post-Saddam Iraq) about refugee children struggling to survive. For a story on Gunner Palace, see this issue's Film section; for information on prices and times, call 704-414-2355 or go online to http://charlottefilmsociety.com. (Brunson)

The American Revolution gets a brief shot of new life today through Sunday. The York County Culture & Heritage Museums are sponsoring Huck's Defeat and the Revolution in the South Carolina Backcountry, May-July 1780, shining a brighter light on the role played by the Carolinas and Georgia in the struggle for independence. Today, the McCelvey Center in York, SC, will feature lectures and presentations on the war. Saturday and Sunday, key Carolina battles are reenacted, providing onlookers with a visceral experience of 18th century warfare, albeit with no actual bullets being fired and the occasional plane flying overhead. Registration begins today at 8am. For details, call 803-684-2327. (William Fonvielle)

July 09 - Saturday
A celebration of her own Southern blue collar roots in last year's hit "Redneck Woman" sent Gretchen Wilson on the path to country music stardom. If she plays her honkytonk cards right and stays clear of syrupy pop country, she just may have staying power. Wilson burst onto the scene with her debut last year called Here For the Party. Indeed. She will open for Pat Green and Kenny "Renee Zellweger's hubby" Chesney at the Charlotte Coliseum. Showtime is 7:30pm. Tickets are $49.50-$59.50. Call 704-522-6500 for tickets and info. (Shukla)

July 10 - Sunday
People of African descent played a role in the American Revolution beyond that of mere slaves. The Main Library highlights the efforts of these valiant souls with the In Hopes of Freedom display in Gallery L. Local artist Michelle Nichole supplies 24 paintings which immortalize such figures as James Easton, a Boston blacksmith who served under George Washington, and Paul Cuffe, who was born free and teamed with his brother to launch a trading business that included running blockades. The exhibit will be on display during regular library hours, today through August 28, A special "Meet the Artist" reception will be held on Sunday, July 17 from 3 to 4:30pm in the Gallery L lobby. For more info, call 704-336-2020. (William Fonvielle)