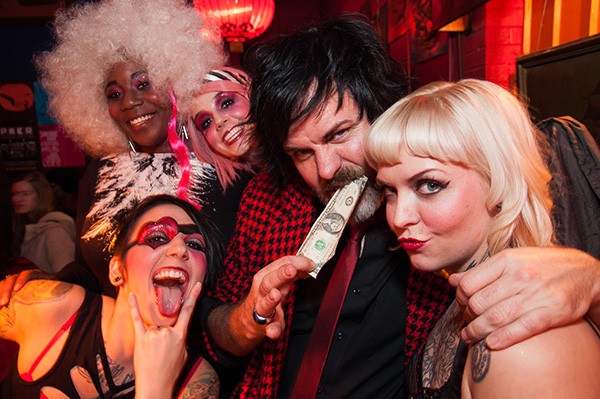 I met her at Shiprocked! She took me home. I didn't leave for three years.

It was Nov. 27, 2008, and I'd gone to the Thanksgiving edition of the greatest show on earth — or at least, the greatest show in Plaza Midwood — to fill the hole left by my still-fresh divorce. On the dance floor, I met a girl. I'm pretty sure "Cracking Up" by the Jesus and Mary Chain was playing. She asked if I was gay.

It was love at first sight.

Not that my story is unique. Shiprocked!, Scott Weaver's decade-long, Thursday night, glam-burlesque-drag party has sparked countless romances and marriages, not to mention plenty of good old one-night stands. 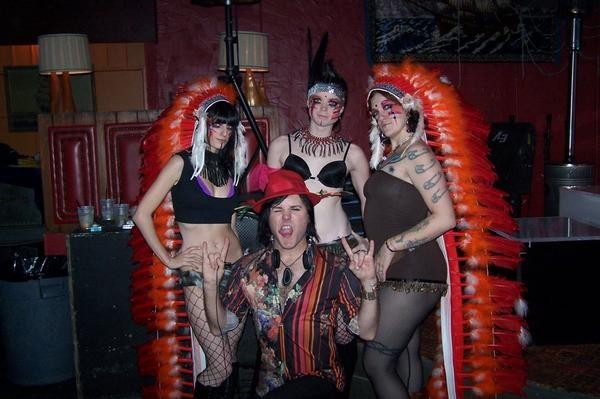 "A number of people have expressed to me that they met the person they are now married to, and have children with, at my party," Weaver says. He's sitting at CLTCH, the boutique he co-owns on Central Avenue, reminiscing about the wildly popular party he started a decade ago. But as all great parties do, this weekly throwdown will be coming to an end May 25, when Shiprocked! slips into dry dock at Snug Harbor one last time, leaving me and a whole lot of musicians, dancers and neighborhood denizens with a dimmer and duller Thursday night ritual.

In its 520 decadent soirees, Shiprocked! has survived ever-encroaching gentrification while continuing to accomplish its mission to explore the fun and the sleaze, consistently living up to its credo as "the little party that could." Since it first set sail in 2007, Shiprocked! has been an enabler for the weird, a platform for uninhibited expression, conceiver of children, matchmaker to neighborhood singles and all-around grand-ass celebration of epic proportions.

"There was no game plan to speak of," Weaver says of the party's initial launch. "Shiprocked! was gonna be me simply DJing at my friend's new bar." Snug owner Scott McCannell had played together with Weaver in the band Babyshaker. "And then it was so fun, I figured if it was going to continue, then I would want to turn it into one of my signature parties, where I bring in go-go dancers and the occasional entertainers."

Shiprocked! was hardly Weaver's first party-throwing rodeo. He's been throwing them since the raving pre-war '90s. But what separates this one from his earlier events is the breadth of entertainment and the almost-instant level of enthusiasm it generated for those looking for new forms of expression in Charlotte. "I never expected it to become a launching pad for certain types of performers — like drag performers that were an alternative to what was Charlotte's idea of drag was," Weaver says.

The drag performers at Shiprocked! have always been more New York Dolls than Bette Midler, he says. Two of the best were Bethann Phetamine and Lillith Deville, both now live and work in other cities, where they continue to push the envelope of what drag can be. And both will be returning to Snug for the final Shiprocked!

"It's where I got my start," Bethann says. "I got to witness all walks of life there."

Cruise through Plaza Midwood on any given Saturday night and it's like a walking tour of Weaver's cheetah-spangled, mirrorball heart. Have you ever popped into CLTCH or Boris+Natasha, or stepped into the Stache Pad? Weaver opened or helped open those shops. Maybe you've admired the cool plates that hang on the walls at Dish. Weaver picked those out for owner Penny Craver.

Do you enjoy hanging out in the retro-diner gleam of the Diamond, or having a swanky birthday get-together with friends at Soul Gastrolounge? Weaver's hands were in the launches of those spots, too.

Weaver's stamp on Plaza Midwood goes back to 1995, when there was very little in the neighborhood to foreshadow its current edgy destiny, other than a little shop called Superior Feet.

"I worked there with [Boris+Natasha owner] Hope Nicholls," Weaver remembers. "It was this punk-rock/club-kid/drag-alternative clothing store. Before there were stores in the mall like that, before you could buy things online, we were that store.

"There was also John Rainey's tattoo shop, and then Thomas Street Tavern, and eventually the Penguin," Weaver says of the stores that existed in Plaza Midwood during that period. "I think I understood, starting about 15 years ago, that it was inevitable that gentrification would happen."

At Superior Feet, Weaver met many of the musicians and other artists he'd work with over the years. He and Nicholls, just over her run with the noted 1980s and early-'90s alternative rock band Fetchin Bones, eventually formed their own band, Snagglepuss. "There was a very small, very tight-knit community, and it was alternative thinkers, artists and musicians," Weaver remembers. 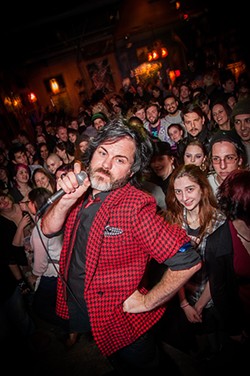 Then came Shiprocked! It became Weaver's not-so-gentle stand against Charlotte conformity. Clubs and events in other parts of the city often worked along hard borders when it came to race, sexuality and economic class, but Shiprocked! let gay culture, burlesque theater, dance music and rock 'n roll collide in an underground party where everyone was invited.

"I only charged a cover a tiny amount of times, so it was always a welcome-with-open-arms vibe, and if you didn't dig it, then get the fuck out," Weaver says, and laughs. "My whole idea was that it's my job to do what I want to do, and maybe people that don't know what the hell this thing is can come and have their eyes opened and feel excited that they discovered something in Charlotte that they didn't know was happening."

People did come, and they kept on coming back.

In the years before Shiprocked! launched, Weaver watched as Charlotte and Plaza Midwood grew, and that growth has continued exponentially during the party's 10-year run. Buy while he has mixed feelings about all the changes, he's never considered moving on. "I was already here, and I'm not going anywhere," he says. "I like what I like, and other people seem to respond to it and need it — so I just keep doing it."

Zoen Wolfe remembers his first voyage. "Shiprocked! was my church and safe haven for some time when I first moved back to Charlotte," Wolfe, a transgender musician and writer, remembers. "It was the hub for my social life and music. I could be 150-percent myself there."

Shiprocked! has brought a fresh atmosphere to the Charlotte club scene like no other event. Try to find another party where you can watch two Brazilian girls dance with abandon to T-Rex's "20th Century Boy" and Pet Shop Boys' "West End Girls," while an inebriated bank bro dry-humps a stage monitor beneath two tattooed Pussy Cat Kill Kill go-go dancers. You won't. Not in Charlotte. In this city's otherwise safe-as-milk night scene, Shiprocked! has been the place to seek out the danger and the dirt, the sound and the fury.

"Shiprocked! changed this neighborhood. It was a place for everyone, no matter what crowd you normally associated with," says Collette Ellis, who got her first break at the Thursday events. Before joining the fire-performing trio Satarah, Ellis was a go-go dancer on Shiprocked!'s maiden voyages. "It developed a sense of community in Plaza Midwood." 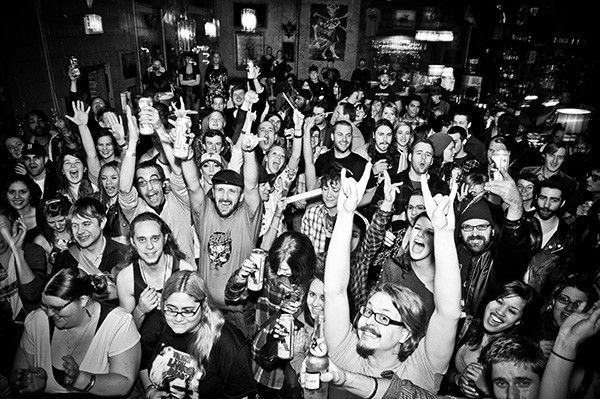 On any Given Thursday at a typical Shiprocked! party, whether the theme is John Waters-like '60s kitsch, Marie Antoinette-style French decadence or space-age wackiness, the emphasis is always on weirdness. And the party is always fun.

"The time I spent as a dancer for Shiprocked! was probably some of the most ridiculous fun I've ever had," Lindsey Rourke, another early Shiprocked! go-go dancer, remembers. "I formed a lot of my relationships in Charlotte through the people I met at Snug during that time." The 29-year-old model and makeup artist sums up Shiprocked! well for a lot of people who have attended: "I got to meet awesome, creative souls. I got to dance on a bar. I got to be on a stage. We got to do group photo shoots. I got to wear whatever the hell I wanted, and do my own thing."

If there's one thing Weaver has consistently stood for, it's been giving people opportunities to do their own thing. Which means that while Shiprocked! as a weekly event may be coming to an end, this week's event is not exactly the end of Shiprocked!. 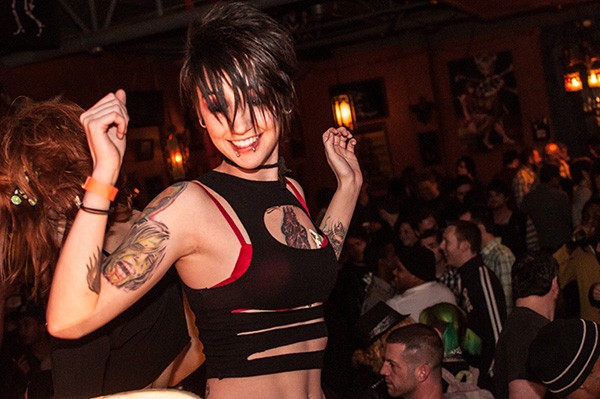 "There's still things I'm gonna do," Weaver insists. "One thing is to charter a double decker boat and do Shiprocked! on a boat. And I plan on doing it for Pride — Pride Shiprocked! has become such a staple, so there will be a Pride Shiprocked!"

Weaver is not the only one who's made Shiprocked! such a success. He credits the myriad of people who have contributed.

"The event is always a collaboration between me, the go-go dancers, the performers and the audience," he says. "I have always held these meetings at my house where we'd hang out and schedule this thing out a couple months at a time, and at those meetings I always say, 'I want brain power, y'all – throw out some ideas, what have we not done that you guys would like to do?"

"Scott Weaver is such a badass and a genius," Rourke says. "I remember thinking when we met that I had never known anyone like him before, and I know I never will again."

So, what can passengers expect at the May 25 "final" voyage?

"Well, being a little overzealous," Weaver says with a shrug, "I have booked heavily."

"I wanted to combine live music, because that's important to me – dance-oriented artists and rock 'n' roll artists, with the full range of drag burlesque and sideshow," Weaver says. 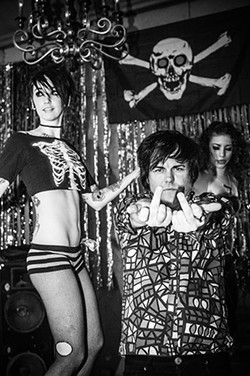 For the final night's theme, the captain has returned to a concept that's defined Shiprocked! since the beginning: the circus.

"I was wondering if it would be unoriginal to do that again," Weaver says. "But then I decided to go back to it because, to me, Shiprocked! has always been a circus — a combination of spectacle and entertainment." He raises his hand like a ringmaster and speaks dramatically: "And here — some rock and roll, some dance music!"

Expect a dunking booth, club kids. And an aerialist. And cotton candy. You'll find tin-type photographer Jeff Howlett on hand to take his signature photos. And there will be special Shiprocked! commemorative T-shirts and posters available for posterity.

(Spoiler alert: We've seen the tee. You have to have it.)

"It's all of that," Weaver continues of the greatest show in Charlotte. "In my mind, Shiprocked! has always been the circus of this neighborhood."