Signs of Life in Gastonia

A vibrant cultural scene is taking shape in Charlotte's misunderstood neighbor. No, seriously. 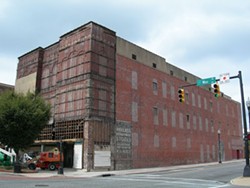 Hall has a large, dedicated following of corporate clientele for whom he caters, so he has scaled back the hours of operation. As more businesses move into downtown, he says he may revisit opening the place for dinner service, but for now, those who wish to sample his mouthwatering menu must content themselves with lunch. Hall's recipe for great fare is simple, focused dishes that start with only the finest ingredients. The Cuban sandwich, Philly cheese steak and Apple Walnut Chicken Salad are all excellent, and his seafood bisque is like a party in your mouth.

Without question, the jewel in the crown of Gastonia culture is the Schiele Museum. Neither as vast or daunting as the American Museum of Natural History in New York or Chicago's Museum of Science and Industry, the Schiele functions almost like a boutique museum. It's collections are both user-friendly and hands-on, and while extensive and varied, are not exhausting.

Executive Director Ann Tippit started her career at the museum as the curator of collections in 1988. Her husband, Alan May, was already on staff as curator of archeology. "Museums talk about owning collections," says Tippitt, "but what we really do is hold them in trust for the public." In 2005, Tippitt became interim director and was subsequently appointed executive director. "It's not my job anymore to make sure that all the objects have their numbers on them and are inventoried or stored properly," Tippitt laughs, adding in her current role, she does everything in her power to promote the advancement of the museum and its mission. "The museum is here to collect and preserve objects and then to use those objects to share an appreciation of nature and science with the public," she says.

The Schiele boasts more than 150,000 specimens and objects. "Specimens that are bugs and spiders, rocks and minerals, but we also have ethnographic objects that have been made by people," Tippitt explains. "Natural history also encompasses the human animal and their products." While the collection of Native American artifacts is inspiring, and the two live baby buffalo are adorable, arguably the most impressive exhibit in the museum is Lucy -- a cast of the Ethiopian australopithecine discovered by the Leakeys. The original bones are making a controversial tour and are now appearing at the Houston Museum of Natural Science. One of only five such casts made, short of a trip to President Bush country or the Smithsonian, the Schiele is the only place you're likely to get a chance to see one of man's earliest ancestors who first walked upright.

Now approaching its 50th anniversary, Tippitt notes that the Schiele itself has been changing and evolving over the course of years to accommodate the 80 to 85,000 regular admission visitors, plus 40,000-plus Gaston County students the museum touches each year. In addition to an expanded, more accessible lobby, Tippitt says that the Schiele will soon offer limited food service and additional seating, to enhance the museum-going experience.

Marketing Director Mary Alice Rogers, adds, "People are very surprised to find that there's a real museum here. It's 60,000 square feet in the building. On top of that, we have a half-mile nature trail, and an experiential archeology site that traces 10,000 years of human technology and development. (It shows how they went about building Stonehenge; using levers and rollers and trees to move rocks just like they did 10,000 years ago.) There's also the Catawba Indian village that traces 400 years of history, and an 18th-Century back-country farm that gives you a picture of what life was like on the frontier. When you add the planetarium -- and Lucy -- you have nothing else like this in the area."