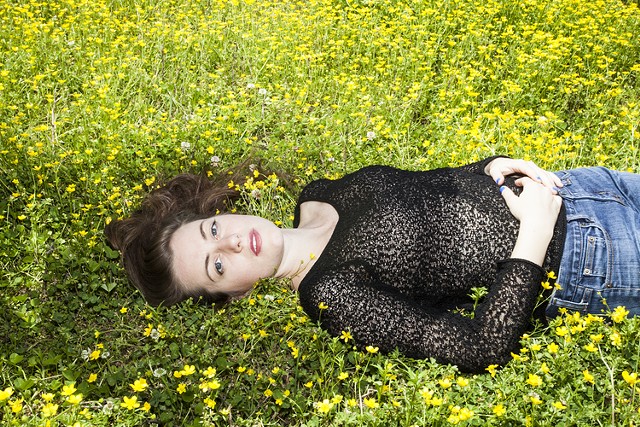 Gudasz will play at the Evening Muse in Charlotte on March 20. I spoke with her by phone last week from her home in Durham.

Sometimes you stumble on new and relatively little-known music, and you want to wave your hands in the air and shout out, ‘Holy crap, people, this is really, really good, and everyone should know about how talented this artist is.’ That was sort of how I felt about music. She’s smart, and her songs have this unlikely combination of cutting humor, devastating insight, and beautiful musical artistry. Her songs cover a lot of terrains, digging into varieties of self-deception, the ways that physical and emotional distance weighs on us, and power of song itself.

You could start out by listening to “I Want To Be With You In The Darkness.” It’s a smoldering slow-drip song about sharing burdens and intimacy, about love and loss. About maintaining one’s own personhood while being subsumed by something bigger and uncertain. It’s crazy romantic, but also crazy heartbreaking. Gudasz knows how to emphasize the dark-light contrast in her songs by adding a jolt of brightness, a soaring high note, a surprising chord change or a lyrical detail to intensify the whole mood.

The opening song on Oleander, a tune called “Kick Out the Chair,” hovers around that light-in-darkness mystery. The song was inspired, in part, by a quote Gudasz read about a poet who had taken his own life. Nested in the lyric is the idea that creativity, making art and beauty, can be a valiant fight against darkness.

Another track, “I’m So Happy I Could Die,” is the rare funny breakup song, a tune built on layers of irony, from the musical quotation of the Beatles’ “I Feel Fine” to the clearly unreliable insistence of the singer’s indifference about being alone. And then there’s just the plain humor of some of the lines, like “I’m so rich since you left me, honey, I could marry someone who would marry me just for my money.” The last laugh counts for something.

Gudasz was raised in Virginia, out in the country, and was just in the air of her house. She started playing the flute as a kid and taught herself piano.

“I’ve always written songs, and my family’s very musical,” Gudasz said. “I grew up listening to a lot of Joni Mitchell. Having songs and having music was just always second-nature to me. I was very fortunate to have that as part of my family dynamic. Writing a song just felt as natural as reading a book.”

Gudasz is a member of the touring group that paid tribute to Big Star’s third album, working alongside Peter Holsapple of the , original Big Star drummer Jody Stephens, R.E.M.’s Mike Mills, and Chris Stamey (also of the ), who also co-produced her debut album. In that context, Gudasz got a real intense glimpse into both how music-making can be a lifetime pursuit and also the variety of ways that artists approach honoring the legacy and material of other songwriters. 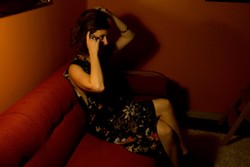 “Anytime you learn someone else’s music, like really learn it, it makes you a better writer or player because you’re sort of mathematically figuring out the logic of what’s going on,” said Gudasz of the Big Star experience. “It made me see how much fun people can have on stage.”

Gudasz can bring to mind a slew of powerful singers and songwriters — Judee Sill, Aimee Mann, Rufus Wainwright, Gillian Welch, Randy Newman even Karen Carpenter. She does brainy piano balladry, with whiffs of the spartan lonesomeness of alt-country, and flourishes of art song. The timbre of her voice is warm and full, with hints of a nasal edge at times. Gudasz delivers lyrics with clear precision, and then sometimes she’ll take a syllable and add expressive ornamental touches, extra shivering notes, melodic frills that prolong the timed-release punch of a line.

As a student at UNC-Chapel Hill, Gudasz studied theater and creative writing, and she brings elements of both of those disciplines to her music. There’s an aspect of drama to the unfolding of the narratives in her songs and how she delivers them in videos and on stage. Her lyrics have a compressed power, showing attention to how the lines work and build.

“Play Nice,” the first single off the forthcoming record, was released in the fall. It’s a departure in terms of metabolism, with a slightly perky synth-pop feel, but it retains Gudasz’s signature lyrical touch. “You can’t tell right from wrong, so I had to write it down for you in a fucking love song,” goes one line. Another goes: “You say play nice/Babe, I’m as nice as a guillotine.”

Music wades into the realm of feeling, but the challenge is in emerging from the murk. As a songwriter, Gudasz does an impressive job of reconciling internal sense and uncertainty with story, character and potent detail.

“I feel like something that’s intriguing to me, that I end up writing songs about, not necessarily on purpose, is getting to all the things that are sort of under the surface, or even palpable, but [that] aren’t necessarily addressed in day-to-day interaction — the reality of emotion.”

John Adamian lives in Winston-Salem, and his writing has appeared in Wired, The Believer, Relix, Arthur, Modern Farmer, the Hartford Courant numerous other publications.