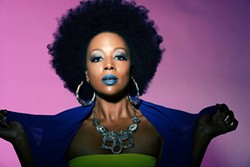 When: Thu., Jan. 30, 7 p.m., Fri., Jan. 31, 7 & 9 p.m. and Sat., Feb. 1, 7 & 9 p.m. 2020
Phone: 7045953311
Email: info@middlecjazz.com
Price: $30.00 - $46.00
middlecjazz.com/calendar
Sy Smith has long since solidified her place in the world of underground soul music (she’s often called “the hardest working woman in underground soul”). This Los Angeles-based singer, songwriter and producer helped cultivate the nu-soul scene in that city more than 10 years ago, a scene which now easily boasts some of the most progressive artists of that genre to date, some of whom came directly from Smith’s own band line-ups (including Thundercat and Kamasi Washington).