Ten Reasons Why Ray Charles Is A Genius

A tribute to the Great One 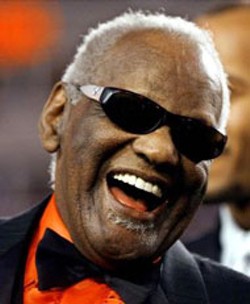 Music writers toss around the term genius so often the word is almost meaningless. Madonna's a genius. Kurt Cobain was a genius. Metallica are geniuses. Yeah, right. Fact is musical geniuses are rare. The 20th century has produced some inarguable geniuses like Duke Ellington, Brian Wilson, and Vladimir Horowitz, but most "musical geniuses" are the mere product of overzealous writers and marketing hype.

Ray Charles, who died on June 10th at 73, will always be on the short list of musical geniuses.

He's the genius who started out as a Nat "King" Cole clone, found his own voice and style, and in the process developed a new musical genre called soul. That alone would rank him among the great musical innovators of the 20th Century. Charles was the first to successfully merge the seemingly disparate elements of gospel, blues, jazz, and r&b. He did so with such amazing grace that those recordings, some now five decades old, still sound revolutionary today.

Then there's his voice. The voice that has influenced every soul singer who followed. For that matter, rock & roll singers owed a heavy debt to Charles. Where would Joe Cocker's career be if he didn't have Ray Charles to emulate? His versions of "Georgia on My Mind" and "America The Beautiful" are definitive. The cliche goes that Ray Charles could sing the phonebook and give you chills. Don't bet against it. Brother Ray could take the most mundane things and make them into art.

As a composer, Charles is underrated, having contributed several classics to the repertoire, including "I Got A Woman" and "What'd I Say." At the same time, his biggest hits, "I Can't Stop Loving You," "Georgia On My Mind" and "Hit the Road Jack," were composed by other songwriters. That may be because, for all his other talents, Charles' biggest assets lay in his interpretive abilities.

Despite his legendary albums, despite having racked up more than 30 hit singles, and despite collecting 12 Grammies, the song many people most associate with Charles is ... "You Got The Right One, Baby." Yes, that Diet Pepsi jingle. (Trivia Note: In the 1960s, Charles did ads for Coke. His product loyalty was apparently available to the highest bidder.) The "Uh-Huh!" song was a cool jingle and all, but Brother Ray has made some monstrous music over the years and he shouldn't be remembered for an ode to a soft drink. Charles should be remembered and revered for his innovations and tremendous versatility. So, for those looking to enhance their record collection, here are 10 albums, in no particular order, that do justice to Ray's legacy, give a taste his many musical sides and provide irrefutable proof that Ray Charles is indeed a genius.

1) Genius Plus Soul - 50th Anniversary Collection (Rhino) Putting this on the list is cheating, but so what. Any true music fan wants this 104-song, five-CD set. From his earliest recordings in the 40s to songs made in the 90s, hear Ray mature into one of the finest pop stars of any era and even become a bit of an MOR phenom. Ray's artistic peak in the 50s and 60s is well documented, and only the better songs from the 70s through the 90s are included. Not a lot of jazz material here, but enough great hits to make this a must in any respectable music library.

2) The Birth Of Soul: The Complete Atlantic R&B Recordings 1952-1959 (Rhino) Yeah, another box set, but it's an important one as it tracks Ray's musical evolution over a seven year period and contains many songs not included on the 50th anniversary set. Listen to Ray move from basic r&b and nasty blues-filled jazz to a more polished and refined sound without sacrificing any authenticity in the process. Then listen to it again.

3) Ray Charles Live (Atlantic) A collection of two great live albums, At Newport and In Person, recorded in the late 50s. Charles was in top form, swinging serious jazz at Newport and rocking out nasty r&b on the other date. Both will blow you away.

4) Genius + Soul = Jazz (ABC) There's much more jazz than soul here as Charles is joined by the Count Basie Orchestra (sans the Count) for some of the hottest big band material cut during the early 60s. Ray gets down and dirty on the organ and the Basie bands swings with tremendous power. The pop and r&b influences are cool, but the potent and credible jazz playing is what stands out.

5) Ray Charles and Betty Carter (ABC) Legend has it Ray brought jazz singer Betty Carter in for this record because he wanted to help her career. He probably also just wanted to sing one with one of jazz's most unique vocalists. There's great chemistry from the opening bars. "Baby It's Cold Outside" has such sublime sexual tension that any modern day singer could learn volumes here from this performance on how to be sensual without being bawdy. Currently out of print, the vinyl versions sometimes fetch over $100 at record fairs. Pick it up and you'll understand why. Yes, the CD versions are much cheaper.

6) The Genius of Ray Charles (Atlantic) Arrangements by Quincy Jones, musicians from not only Ray's band, but the Duke Ellington and Count Basie Orchestras, and songs like "Let The Good Times Roll," "Come Rain, Come Shine," "Just for a Thrill" and "Don't Let the Sun Catch You Crying." That pretty much sums it all up. Ray knocks you on your butt one moment and has you weeping the next. This is Brother Ray at the peak of his powers, which were obviously heaven sent.

7) The Great Ray Charles/The Genius After Hours (Rhino) Forget Ray's great voice and forget the Raelets. This is Charles playing small combo instrumental jazz. Recorded in the late "50s when he was in the middle of defining soul music, this bebop date showed Charles was also a fine jazz pianist who could jam with the likes of Oscar Pettiford. So out of character is this album, if you play it for your friends and challenge them to guess the pianist, you could win a lot of money. Of course, given Ray's abilities, no one should really be surprised.

8) Modern Sounds in Country and Western Music (ABC) In his autobiography, Brother Ray, Charles fondly recalls listening to the Grand Ole Opry on the radio while growing up in Georgia. Ray added his own bluesy twists to country standards and the formula worked flawlessly. Country fans loved the authenticity; soul fans dug Ray's unique twists. Everyone loved his passion as Charles scored a number one crossover hit with "I Can't Stop Loving You" and the album, Modern Sounds in Country and Western was a best seller.

9) Ultimate Hits (Rhino) Just what the name implies. For the casual Charles fan who's not sure where to start. The two CD set has all of Ray's biggest hits and some of lesser known ones. A good Ray pop/soul/r&b primer.

10) Soul Brothers/Soul Meeting (Atlantic/Rhino) These two records, recorded in "58 and "62, now on one CD, paired Ray with Milt Jackson, the most influential jazz vibraphonist of the past 50 years. Forget about ego clashes, these two made great jazz like, well, soul brothers. Fine musicians making fine jazz. What more could you ask for?