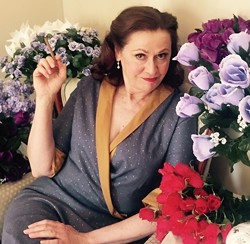 When: Thursdays-Saturdays, 8-10:30 p.m. Continues through May 27 2017
Phone: 704-559-9051
Email: info@threebonetheatre.com
Price: $22 in advance, $28 at the door
www.threebonetheatre.com/current-production
Three Bone Theatre presents the Charlotte premiere of The Actress, a new comedy by Peter Quilter, directed by Charles LaBorde. A funny and poignant new comedy, The Actress dramatizes the events backstage as a colorful, complicated woman makes her farewell performance, while dealing with the unexpected arrival of her provocative ex-husband. Drama and comedy collide as they say their goodbyes, declare their love, roar with laughter, spit insults, renew old battles, and grab a final embrace. This Charlotte premiere production is set in the 1930's and will feature Paula Baldwin as "The Actress". May 18-20, 25-27 at 8:00 pm