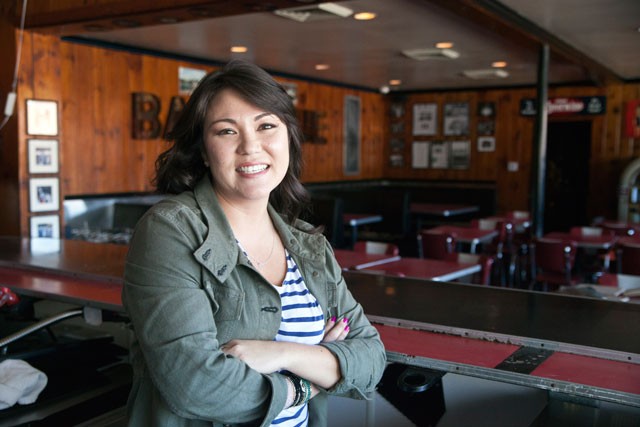 In the corner of Thomas and Commonwealth avenues, at the pulse of the eclectic Plaza Midwood neighborhood, stands The Penguin — empty, gray and lifeless. The faded church pews lining the storefront look out onto a sea of litter, mostly alcohol bottles and crushed cigarette packs. Inside, restaurant equipment still bears the grease of its former tenants. Vinyl chairs are scattered in disarray as if someone pulled the fire alarm mid-service, evacuating a packed house that never came back.

Over the years, controversy has plagued the place that has been everything from a day drinker's oasis to a nationally acclaimed diner. The iconic business, opened in 1954 by Jim Ballentine, has been a point of contention for members of the tight-knit Plaza Midwood community, evoking both fierce loyalty and passionate rancor.

So, when Alesha Vanata announced her purchase of The Penguin and the intent to open a second restaurant concept behind her inaugural Myers Park eatery LittleSpoon, opinions swirled. The little press that Vanata did offer, without full details, sparked impassioned Facebook threads and even an op-ed piece from Charlotte native Scott Lindsley, 46, who shared his perspective on supporting small business and the inevitability of change to quiet the haters.

The public bemoaned another pizza joint in Plaza Midwood and prayed to the development gods that it wouldn't be a corporate chain. Vanata confirmed that pizza and burgers were out.

The working name of the restaurant is Comida, says Vanata, 36. The "upscale casual" eatery will be dedicated to pan-Latin flavors with a Mexican focus — that is, Colombian food, Argentinian flavors, Chilean and Peruvian "all wrapped in a Mexican blanket." Think wood-burning grill and handmade tortillas, fresh flavors, a big beautiful patio and plenty of tequila.

Vanata grew up on the East Coast, where there was little exposure to Latin flavors, save the Taco Bell and a hilarious nonfictional establishment named Carlos O'Kelly's.

"Moving to L.A. at 21 was eye-opening," says Vanata. "L.A. wasn't yet a food city, but they had taco trucks and fruit stands and I was exposed to multiple regions of Mexican cuisine from Oaxaca to Guadalajara."

Through work and travels, Vanata fell in love with Latin cuisine from the multi-regional Mexican influences she found all over California to South American flavors and techniques she picked up along the way through friends.

"There are so many wonderful flavors and variations that we, as Americans, take for granted," says Vanata. "They all tend to get lumped under one umbrella and labeled as Mexican."

Vanata moved to Charlotte from Los Angeles two years ago, having spent more than a decade working in restaurants in all facets and as a food stylist, culinary producer and recipe developer in the industry. Her focus when she moved to the Queen City transitioned to building successful restaurant concepts.

"I just want to build places where I'd want to hang out," she says.

Walk into LittleSpoon in Myers Park and you get a glimpse of Vanata's personality, from the modern industrial design to the hip-hop music on blast and lyrical quotes from famous rappers peppered throughout the menu.

In the new space, Vanata is cognizant of honoring the space once occupied by The Penguin.

"We're staying true to the original exterior, but we're ready to add some charm back to the corner and show that property the love that it deserves," she says.

For those wondering, the jukebox is going.

HOPE NICHOLLS, owner of Boris & Natasha, the funky clothing store directly across the street from The Penguin, is looking forward to having a new neighbor. "I want to see people coming back," she says.

Donning a mohawk, cropped leather jacket and slouchy boots, the stylish owner who has been running Boris & Natasha for nearly 17 years, explains that her business used to serve as the Penguin's unofficial waiting room, back when lines were pouring out the door. It was good for the neighborhood, she says, and good for business.

In addition to welcoming new faces to the neighborhood, Nicholls also hopes to keep a homegrown vibe amidst the incessant development consuming the city.

"I truly believe in diversity," she says. "It's the urban way. That's why New York remains an interesting place."

Take a drive anywhere in Charlotte and you are likely to run into a construction-related detour. Cranes dot the cityscape erecting new apartments (so many apartments) and workers in neon vests and hard hats labor diligently to lay tracks for the light rail extension or build multi-level parking lots. Some welcome the new density that has afforded Charlotte the title of second-fastest growing big city (defined as a city with more than 500,000 in population) in the nation. Others worry it will cause the neighborhood to lose its texture.

"I'm anxious to see retail growth in the business district," says Lesa Kastanas of The Diamond and Soul Gastrolounge. "But, as small, quirky buildings get gobbled up in this development boom, the opportunity for small businesses shrink. Even if these new buildings offer the stereotypical 'living on top, business on the bottom' scenario, the rent is often much, much higher. We've seen this happen in Uptown, where retail is nonexistent and the majority of restaurants are large chains or owned by regional restaurant groups with deep pockets."

In the T-shaped delineation of Thomas Street and Commonwealth Avenue, Plaza Midwood's heart, are beloved businesses — Common Market, City Supply, Thomas Street Tavern and Boris & Natasha — all created by a grassroots group of artists, musicians and longtime neighborhood residents during a time when small businesses were small. There was no big money, only an old fashioned "let's put our life savings on the line and do this thing" kind of attitude. Back then, these pioneering entrepreneurs were willing to grab onto their combat bootstraps and take a risk on a neighborhood that was a tad grittier than it is today.

"It was a seedy, seedy town," says Blake Barnes, 46, owner of the Common Market. "Police referred to my back parking lot as hepatitis alley, but the rent was cheap."

Barnes opened Common Market shortly after The Penguin reopened in 2001 by partners Jimmy King and Brian Rowe, now owners of The Diamond. Greg Auten, former Penguin partner, now owner of Pinky's Westside, was in the kitchen.

"The Penguin and Common Market helped to bring the neighborhood off Central Avenue," says Barnes.

Established in 1954, the Penguin lived its first life as an ice-cream shop turned "drive-in" where the normal clientele consisted of day laborers and dedicated drinkers.

"It was very crusty," says Nicholls of the Penguin in the early 1990s. "You did not go in there unless you wanted an experience, or to underage drink. And you would have never eaten there."

The Penguin later got a face-lift in 2001, but ownership changes, talk of franchising, mismanagement and a dizzying array of rumors followed by community boycotts administered the crushing blow that eventually shuttered its doors in 2014.

AS TIME MARCHES ON, the landscape in Plaza Midwood undergoes another evolution. New businesses fill vacant spots, and the dining options are increasingly abundant, from greasy spoon breakfasts to upscale small plates and everything in between — including a plethora of pizza.

Through all this new development, the Penguin patiently awaits its new life.

Vanataa's first permit review happens in mid-April, and if all goes well, she can begin the real work. That includes a research trip to Oaxaca and Mexico City for an immersive experience in history, cuisine and culture. Then, the buildout.

"I think the smartest thing she's doing," Barnes says, "is coming in with a new concept."

Comida will be open for lunch and dinner. Vanata says she's found the perfect fit for the executive chef position. The new hire has a deep understanding of pan-Latin flavors and a passion for the cuisine, but she's not willing to share his name just yet.

"I want to give the people in the neighborhood a new place and the industry a place to relax," says Vanata. "I want to restore that corner to its rightful place, as neighborhood beacon."