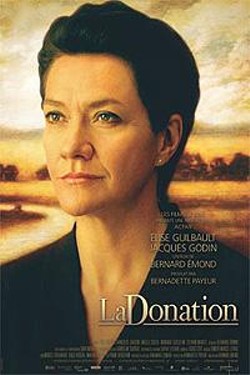 A dedicated country doctor in the town Normetal, Dr. Rainville, looks for someone to take over his practice. Jeanne Dion, a doctor living in Montreal, replies to his advertisement. She spends a week accompanying him on his home visits, to hospices and hospitals, and observes his close relationships to his patients. In the evenings, he tells her the family histories of his patients. After he goes away, she gets to know the town and its people in whose hard lives the doctor has played a special role. Life has been tough for the townspeople as the local mine that was the town's lifeblood was shut down thirty years ago. Jeanne gradually becomes drawn to the region and finds in her patients a dignity, honesty and trust she never experienced in Montreal. Some months later, although she has become attached to her new patients, Jeanne still hesitates to accept the doctor's proposition as she doubts her ability to assume such a commitment to the community.

The Legacy (La Donation) is not showing in any theaters in the area.