The life, death and rebirth of hip-hop artist/filmmaker Jeff Lucky 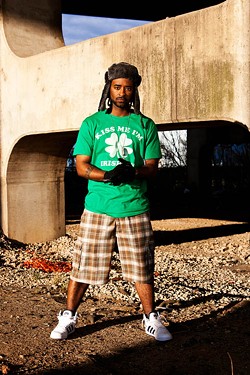 Throughout his career, filmmaker and hip-hop artist Jeff Lucky has lived, died and lived again.

His story has played out in every medium imaginable — from newspapers and magazines (including The New York Times and Sports Illustrated) to television shows (on networks like Fox News and CNN) and film.

Owner of the production company Dark Prometheus Films, he finds inspiration in the Greek god who brought fire to man — and as punishment, was bound to a rock where an eagle ate away his liver every day. "The whole metaphor of Prometheus ... it's not literally just giving fire, it's giving enlightenment, knowledge, culture, information — giving of oneself to the people," he says. "I don't focus on the fact that he had to sacrifice for the people; I focus more on the fact that no matter how many times the eagle ate away his liver, it always [came] back."

Lucky the filmmaker was a top finalist in the Independent Film Channel's Absolut World Filmmaking Challenge for his short film Little Mama, and he was recognized by the Sundance Institute for his short When It Hurts. A recent project, Power: The Seven Day Theory, was a 2010 quarterfinalist for the Academy of Motion Picture Arts and Sciences' Nicholl Fellowships in Screenwriting. He has also written for television and says he still gets e-mails from fans in countries as diverse as The Netherlands, Spain and France for his work on a hit series that aired in 2009 (more on that later).

Lucky the hip-hop artist has been making music since 1993. A former member of the rap crew DPS (Dirty Pretty Shit), he is now president of the independent label SummerSoul Records. On Jan. 11, 2011, he released his first solo album, Soul Motivation, a project he calls "the end of my beginning." The story of how he got to this ending begins in Charlotte 32 years ago.

Three girls, one boy, a mama and a daddy. Namesake to his father, Lucky was born Jeff Moonie Jr. in 1978. Growing up, his role model was Jack Kemp, the NFL player turned politician. Lucky imagined he could be like Kemp someday, except football didn't work out. While listening to groups like NWA and A Tribe Called Quest, he found young black men who understood where he was coming from, who got him.

Drawn to the feeling of empowerment the music and lyrics gave him, Lucky decided music was as good a way as any to get his point across and effect change. He started calling himself a rapper. But a conversation with his sister, Cherica Adams, made him challenge the notion of who — and what — he was.

"I had a car ride with my sister, my late sister, that changed my life," he says. "I was riding with her, and I said, 'Yeah, I'm a rapper. I'm going to make films and I'm a rapper too.' And she was like, 'If you're a rapper, what are you doing?' And I didn't have an answer. And so when I couldn't answer, she was like, 'If you're not doing anything — you're not making songs, you're not trying to get on — you might as well not do it at all.' And she turned around and picked up a Vibe magazine, and she booked me a record and film seminar in Atlanta."

Adams and Lucky soon took a road trip down to the ATL, where he freestyled for Dallas Austin's producers (the same Austin who has produced music for artists such as Michael Jackson, Madonna, TLC and Gwen Stefani) and rapped for Shakir Stewart, the former executive vice president of Def Jam Records. "[Cherica] actually dropped everything that she was doing to manage me," Lucky says. "When she dropped me in the mix like that, we were making serious contacts. But me being a teenager then, I didn't understand how long it takes for the whole process to work itself out."

Though he was unprepared for how long things took ("I thought that if you go to Dallas Austin's studio and you know somebody in there," he recounts, "that, aye, you should have a CD out in two months.") Lucky says he thrived on the experience. But soon after Adams put him on the music scene, tragedy struck and his life spiraled out of control.

Two girls, one boy, a mama and a daddy. In 1999, Adams was murdered by a hitman hired by former Charlotte Panthers wide receiver Rae Carruth. "Everything was just derailed," says Lucky. "We had a lot of momentum, I was meeting people, we were making music and then after that, it was just nothing. It was just me sitting around looking like 'What happened'?"

A national spectacle drawn out over radio and airwaves, including three months on Court TV, is what happened. Lucky says the experience drove him into a deep hole and left him unable to create. "When you have something like that played out in front of everyone, and you have people approaching you — you know, I had to turn on the radio and hear people say all manner of vile things about my sister after she was already deceased — it makes you so bitter toward the public in general, that you don't wanna give them anything at all.