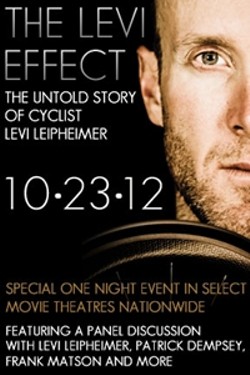 The Story of Levi Leipheimer

NCM Fathom Events, Bike Monkey and Citizen Pictures invite you to movie theaters nationwide for a special one night event marking the debut of the untold story of professional cyclist Levi Leipheimer in The Levi Effect. The event will begin with an introduction from Levi where he will set up the documentary. Immediately following the debut of this personal account, Levi will return with some of his friends for an in-depth panel discussion about the current state of professional cycling and what the future of the sport looks like. Panelists include actor Patrick Dempsey, filmmaker Frank Matson, and others. Professional cyclist Levi Leipheimer has been nearly silent in his efforts to impact the lives of those around him. Until now.

The Story of Levi Leipheimer is not showing in any theaters in the area.