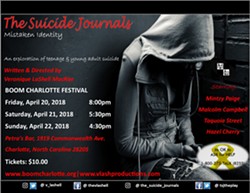 When: Fri., April 20, 8-9 p.m., Sat., April 21, 5:30-6:30 p.m. and Sun., April 22, 4:30-5:30 p.m. 2018
Email: bookings@vlashell.com
Price: 10
boomcharlotte.org/speakers/v-lash
Written|directed by Veronique LaShell MacRae of V. Lash Productions, “The Suicide Journals” aims to take an in-depth, intense and raw look at teenage and young adult suicide through the lens of a woman who struggles with her identity in a religion that coins homosexuality as sin, a promising scholar challenged by the systematic injustices of American society, a girl whose Islamic faith unwillingly invites bullying & a woman who learned at an early age that her body was not her own. This award-winning performance is the recipient of The Best Play, Best Ensemble, 4 ½ Stars (DC Metro Theatre Arts).