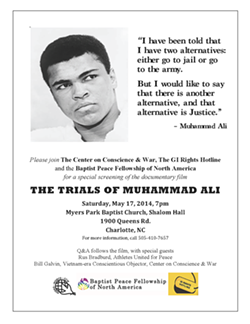 When: Sat., May 17, 7 p.m. 2014
Phone: 505-410-7657
Email: maria@centeronconscience.org
The Center on Conscience & War, The GI Rights Hotline, and the Baptist Peace Fellowship of North America present a screening of the documentary film The Trials of Muhammad Ali. The film focuses on Ali’s life; from childhood, to his Olympic win, to his conversion to Islam, and to his objection of the war in Vietnam. His objection to the war and refusal to serve in the Army left Ali banned from boxing and faced with a five-year prison sentence. Touching on the issues of race, faith, conscience, and identity, the story of Muhammad Ali is moving and powerful.