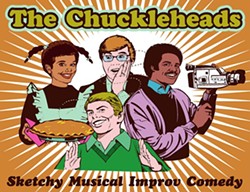 When: Sat., May 16, 8-10 p.m. 2015
Phone: 704-301-1564
Email: scott@planetimprov.com
Price: $10/$15
www.planetimprov.com
The Wear Purple Comedy Improv Musical Variety Extravaganza Starring the Chuckleheads' show will celebrate Wear Purple for Peace Day with unscripted improvisational comedy games (ala Whose Line Is It Anyway?, Improv-a-ganza, and the Second City,) musical games/activities, game show elements that are staples of the seven-year-old Chuckleheads’ improv comedy troupe’s shows. And it’s all made up on the spot. Food, alcoholic and non-alcoholic drinks will be available before, during and after the show. Tickets are $10 when purchased in advance or when you are added to the guest list at 704-301-1564 or scott@planetimprov.com.