The week in craptastic television

We took one for the team and watched prime-time TV – so you don't have to.

By Amanda Schurr and Joel Rozen
click to flip through (2) 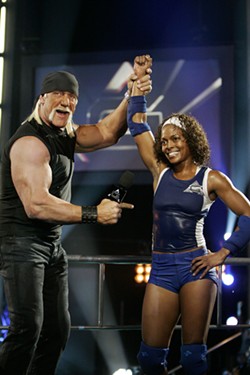 OK, so maybe we could've picked a tougher fight.

You can't blame the networks, really, for today's prime-time lineup. The writers are picketing, after all, and the bigwigs need something to put on the air after we all finish dinner. But jeez -- American Gladiators? What's next -- a 61-year-old Sly Stallone remaking Rambo? (Don't answer that.)

Yup, the boob tube's gotten pretty ugly. And because we at CL are gluttons for punishment, we decided to see firsthand just how bad it's become, and spent four straight evenings glued to the couch. The following excerpts outline what we witnessed during our incredibly masochistic project.

One final note on what you're about to read: While it may seem as though the writers behind this article -- Ms. Schurr and Mr. Rozen -- harbor some ill will toward the programs they endured, I have strong evidence that they enjoyed these shows far more than they let on. Because that's what network TV has become in this writer-less, reality-driven age: one long, flashy, humiliating guilty pleasure.

Damn is Hulk Hogan tan -- and basted. As I sat in front of the television last night, flipping back and forth between "first-run, nonscripted" network offerings before finally settling on American Gladiators, I couldn't help but curse those damned striking writers. So this is what it's come to? Thanks to your greedy little campaign for Internet and DVD residuals, I'm subjecting my already teetering sanity to the chortlings of the Hulkster and a guy nicknamed "Big Country" who likened a physical challenge to "hog wrestling at the fair"?

"You are the baddest of the bad! You made it down, you didn't slow down, you didn't mess around," the erstwhile Terry Bollea praised winner Sienna -- that is, when he wasn't calling her "sister" or a male competitor by the name of Adonis "brother" or throwing the action to fellow reality TV whore and co-host Laila Ali (of Dancing With the Stars fame). Believe it or not, the original American Gladiators premiered almost 20 years ago. Now, amped up as if having popped one too many Flintstone vitamins, the good ol' boys and girls were back, "heck"-ing and "darn"-ing their way through family-friendly challenges like The Gauntlet, The Earthquake and the ultimate obstacle course, The Eliminator, as a color commentator looked on, observing, "Oh, this is painful."

Couldn't have said it better myself.

Are we the jabronis here? Sure does feel like it, what with "prime-time" television reduced to a mishmash of aging stand-up comedians on game shows (see opposite page) and D-list stars jumping from reality show to reality show with the frequency of a cheap ham radio. The cameras swirled, the ADHD jump cuts verged on seizure-inducing, and Gladiators' hosts and contestants unleashed a sensory-overloaded, mind-numbing assault that made me feel like I'd been Tasered (bro). Ali may have scored as a footloose celebrity/daughter/"star," and Hogan may have known best in his televised household, but in their unholy union, "fueled on and powered by Subway," I was anything but entertained.

"I'm agile like a mongoose!" Adonis boasted to his rival. (I can't recall whether it was Militia or Wolfman -- I was sucking my thumb in the fetal position at the time). "It's over! It's over!"

Unfortunately for me, it's not. (Schurr)

I feel sick to my stomach, and it's not due to the pint of Ben & Jerry's Chunky Monkey I inhaled while watching two hours of The Biggest Loser: Couples. Nope, it was the sheer sadism inherent in a show that strips morbidly obese individuals of their dignity and self-respect -- not to mention their clothing -- and then dangles the proverbial carrot cake in front of them as a test of willpower.

I feel for these people, I really do. Hell, it's post-holidays, and I'm carrying a few surplus pounds myself. But there's a thick line between a daily battle with the dessert tray and the brazen gluttony that brought these 10 couples to their buckling knees on a super-sized erector seesaw. Yeppers, for last night's physical challenge, whomever teeter-tottered the best won a calling card to phone home from this oh-so-very public camp for fatties. There, I wrote the word. But that's the flabby, grotesque reality of the matter.

It's in poor enough taste that at the conclusion of each episode contestants must send a couple home, relegating the losers to losing no more. It's all the more humiliating that folks with such poor body images must weigh themselves on a slab-like scale, the ladies clad only in sports bras and spandex and the men in shorts, jelly rolls and moobs and back fat on embarrassing display for mass network consumption.

By the time the show wound down, as contestants placed their send-off votes down on silver platters, the wretched taste in my mouth was venturing south. I just couldn't digest watching human beings reduced to their basest forms, desperately -- and in vain, thanks to the fine, compassionate folks at The Biggest Loser -- trying to step away from the Ho Hos, deny themselves the Ding Dongs and drop the weight, all of it broadcast for our, what, motivation? Entertainment? What is the purpose of this again?