To bee or not to bee

Inside the crisis facing honeybees — and our food 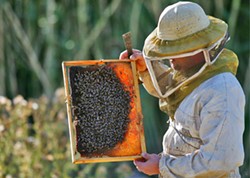 North Carolina State University entomology professor David Tarpy has been studying honeybees for 14 years. During that time he's seen bees die off due to mites, pesticides and a wide array of problems -- but he's never seen anything like today's crisis. Tarpy is part of a national working group of scientists and federal officials investigating the causes of colony collapse disorder, or CCD, an affliction causing more than one quarter of the country's bee population to become disoriented, fail to return to their hives and die.

What's the scope of this problem?

David Tarpy: The problem appears to be nationwide, in over half of the states. About 20 to 30 percent of the colonies that died this past winter seem to have been afflicted by what appears to be a CCD symptom. In Europe and some parts of Asia, there have been these unexplained losses as well. Since we don't understand what's causing our losses or their losses, we really can't say whether it's the same phenomenon.

Why is this a serious problem?

Most people think that beekeepers are just hobbyists who harvest the honey. Well, in reality, about a third of everything we eat relies on honeybees for pollination. Blueberries, apples, cucumbers, melons, squash -- about a hundred crops or so nationwide rely on bees. So they are a real keystone species in agriculture, and they account for $20 billion a year in produce. That's why it's so important that we're losing colonies, and we can't explain why.

What are the possible causes?

There's this big laundry list of possibilities, so each of us is coming to the table and applying the techniques of our science to try to cross these different possibilities off the list and determine what's going on. The working group's going to concentrate on three main areas: One is nutrition, stress and developmental health of the bees. The second is a new or existing pathology -- some parasite, pathogen or disease that might be responsible; either a brand new one we don't know anything about or a new mutation of an existing one. Third, environmental contaminants, so pesticides used inside the hive or externally.

Because bees have problems with mites, beekeepers have to use miticides to keep the mites at bay, so yes there are pesticides used inside the hive.

I've read that pesticides called neonicotinoids, which were banned in France, are widely suspected to be the source of the problem.

I've also read that some people believe genetically modified crops are the culprit.

That's certainly a valid potential environmental contaminant, but it's actually relatively low on the list of priorities because beekeepers that have been experiencing these declines don't seem to be experiencing any pattern in regard to their proximity to GMO crops. There doesn't seem to be lot of evidence, either anecdotal or empirical, that points to GMO crops as a major cause of CCD.

How much is North Carolina affected by this problem?

We don't know. Unfortunately, the reporting is passive; beekeepers voluntarily give the results through an online survey. I can't even tell you with any accuracy how many hives we have in the state. Record keeping and reporting is one of the identified problem areas in apiculture.

When and how will consumers start to be affected by this crisis?

It's going to be noticed first and foremost by the beekeepers. This is all incredibly stressful and expensive for their business. They'll take a huge financial hit and then restock. In the long run, if these mortality rates keep up, there might not be enough bees to go around to pollinate the crop, and the price of renting a hive will go up. It's very possible that we'll see a rise in the cost of produce -- there'll be a lot less of it. So it may have a much broader impact depending on the magnitude and the duration of the problem ... It's entirely plausible that this is something beekeepers have been dealing with for a while now.

This story originally appeared in The Independent Weekly.