Tricks of the transit trade 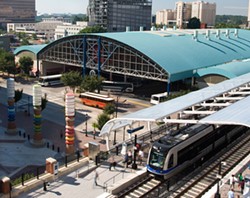 It makes a great story. Big banks have bilked the city of Charlotte and its mass transit system out of almost $20 million a year in a complex financing setup that could and should be used to fund the Lynx Blue Line.

Except the story, in a study sent to newspapers across the country and even reported on by some, isn't true. And one of its authors, Saqib Bhatti, admits it.

Bhatti belongs to a Chicago nonprofit called the Transit Refund Coalition. The group's "Riding the Gravy Train" examined how some cities in the U.S. have compensated for the revenue shortfalls of their transit systems, in Charlotte's case raising fares. But the nonprofit argues that funds should instead come from the interest Charlotte is paying on municipal improvement bonds to big banks through a complicated financing system called "swaps." The banks, Wells Fargo and Bank of America, have been lining their pockets with cash all along while Charlotte's transit users have had to pay more to ride, according to Transit Refund Coalition. In its telling, cities from coast to coast are getting stiffed in the deals to the tune of billions a year.

At least in Charlotte, the study has better illustrated how an organization with an agenda can use real data in a misleading way to push its message on the public and the media. It's shown how the dishonesty of some advocacy groups has the potential to set back the good work of others.

Upon initially hearing about the study's findings, a citizen's watchdog group called Action NC planned a protest outside Wells Fargo's main Uptown building. Action NC is a Charlotte nonprofit whose primary focus is ensuring mass transit remains affordable to people of low and moderate incomes. Group members and community organizer Luis Rodriguez says the organization prides itself on keeping its ear to the ground for the benefit of the public, particularly the less fortunate.

But after meeting with city Treasurer Scott Greer and city Debt Manager Adam Guerino, the group cancelled its protest plans, Rodriguez says, because it became apparent that the Transit Refund Coalition played fast and loose with the facts and drew misleading conclusions about how much leeway the city has in allocating funding for municipal projects.

Swaps work like this: when a municipality, such as Charlotte, wants a good interest rate on bonds it issues to fund public projects, it will "swap" rates with whichever bank agrees to help finance the project. A municipality pays the fixed interest rate normally given to a bank, which assumes the risk of a variable rate, usually set by the Fed. Rates have been under 2 percent and as low as .5 percent for several years.

The study states, almost correctly, that Charlotte is paying about $19.4 million in interest payments on swaps each year to Bank of America and Wells Fargo. In reality, it pays about $19.7 million, with $8.3 million going to BofA and $11.4 to Wells Fargo, for separate endeavors, including three water and sewer projects and construction of the NASCAR Hall of Fame. According to state law, money being paid for one project cannot go toward another. In other words, the $19.7 million couldn't even go toward transit projects if Charlotte wanted it to.

"[The coalition's] argument is persuasive," Greer says. "But it's just not true. There is no connection there at all."

Greer and others familiar with swaps acknowledge how confusing the financing system can be. But swaps, generally avoided by private corporations, give municipalities and other government entities the ability to lock into a favorable interest rate at the time their bonds are issued, Greer says. Extremely low interest rates, like ones that exist now, favor banks, while municipalities could be stuck paying on higher interest rates. But markets do fluctuate, and the justification for using swaps is to keep project costs down in the long run, city debt manager Guerino says.

Municipalities that enter into swaps know going in that there are costly penalties associated with backing out, which is part of the reason why Charlotte doesn't do more of them, Greer and Guerino both acknowledge.

"In an ideal world, the city could renegotiate these [swap] deals," Rodriguez says. "But the [interest] money can't be used to affect other funds."

Bhatti, the Transit Refund Coalition's senior research analyst, readily admits that a correlation doesn't exist between Charlotte's transit projects and the interest payments the city is making on the swaps. He argues instead that the banks have a "moral imperative" to give back to the citizens of this country who footed the bill for the bailouts that ensued after the economy tanked in 2008. He disagrees that the nearly $20 million the city pays in interest on swaps each year should be considered dedicated payments for specific projects only.

"Money is spongeable," Bhatti says. "It can be moved around."

BofA did not return a phone call seeking comment.

Wells Fargo spokesman Josh Dunn says that if others choose to misrepresent facts, it's out of the bank's hands.

"We can't control what people do to make a statement," Dunn says. "For meaningful dialogue to occur, all parties must share a commitment to accurately represent the facts."

"We contacted the author of the report and informed him of the errors," Kinard says. "He refuses to correct the report."

Financing mechanisms for public projects across the state are overseen by a Raleigh-based state agency called the N.C. Local Government Commission. Third-party market advisers also are customarily brought in to ensure financing structures are sound, Guerino says, adding that neither the city nor the state take the prospect of a swap or other major financing tools lightly.