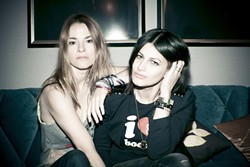 Electro-pop duo Uh Huh Her, featuring Camila Grey (a former member of Melodrone) and Leisha Hailey (formerly of The Murmurs and an actress), has returned to its roots on its latest album, Future Souls, which was released in March. UHH has finished experimenting with the rock tinges that highlighted the last two EPs in favor of the electronic atmospheres that dominated the group’s early work. (Jeff Hahne)