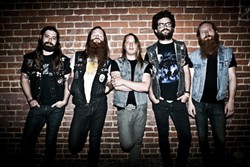 Creators of anthems, purveyors of a Southern rock/metal hybrid and, allegedly, survivors of the crash landing of a spaceship from Venus, the quintet known as Valient Thorr is six albums strong in securing its rock ’n’ roll legacy. The Chapel Hill-based band, whose most recent release is 2013’s Our Own Masters, takes the no-bullshit approach in its songwriting and high-energy performances, both of which resonate with fans. (Jeff Hahne)