What If the Water Runs Out?

Experts discuss the prospect of a bone-dry Charlotte 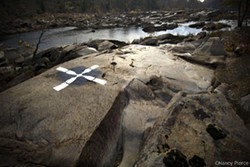 Even though there have been a few sprinkles of rain across the Charlotte region, the city is still in the midst of an exceptional drought. And though there has been a 29.5 percent reduction in water usage since the mandatory restrictions took effect in August, we're still in danger.

But maybe danger is too strong of a word; according to Catawba Riverkeeper Donna Lisenby, there is a one percent chance that the water in the river could dry up completely.

"For us to completely run dry," she says, "we would have to not get rain for a year or more."

But if it happened, where would that leave us?

"I'm laughing," says Chatham Olive of the Sierra Club, "but I'm not because that's a serious question that more people need to be asking."

Olive says if the water dries up, the population will dry up as well. "Look at Atlanta. They only have one lake down there. We have a few more lakes, but we also have more power plants on those lakes."

Olive also points out that power plants are one of the major water wasters in this area because water evaporates from the plants and is never recovered.

"We need to find a way to generate clean power that doesn't depend on water," says Olive.

Duke Energy says in a statement on its Web site that while we're still in the drought, running out of water is not going to happen right now.

"While our region certainly welcomed the recent rainfall, it did not break the drought. Current estimates continue to indicate that stage four drought triggers will be met between mid-December 2007 and mid-January 2008 ... Stage four does not mean the remaining supply of water in the basin is depleted. Rather, tougher water restrictions will be needed at that time," reads the statement.

Duke Energy spokesperson Tina Worley says that if the region moves to stage four restrictions, it doesn't mean that there is no water.

Worley says Duke Energy is a part of the drought team that's working to make sure no one runs out of water.

"We're looking at can we drop piping in at other places," she says if there continues to be no rain. There's even talk of building platforms at the deepest parts of the river basin to pump water if conditions worsen.

Worley says that while it is forecasted to be a dry winter, some rain is expected.

"We're going to pray for rain," she says.

According to Worley, cooler weather means there will be less water evaporation. But the change in seasons also means that some people aren't thinking about the drought.

"We have to keep this in front of the people," Worley says.

Lisenby says that as drought conditions worsen, everyone becomes "a good neighbor." She believes that if we were to run out of water, other states like South Carolina and Virginia would share with us.

"No one is going to see a hospital go without water," she said.

"The biggest unknown is that we don't know how long this is going to last," Culbert says.

The Charlotte region is connected with the drought management team as well, according to Culbert. Part of the duties of the team is to come up with contingency plans to make sure the area would still get water if the drought worsens.

"We have a unique water system," says Culbert. "The river was damned up to create 11 reservoirs. Many other communities just have the ability to access one [water reservoir]."

But the water reservoirs service 1.5 million people. So while Charlotte may not be facing the dire situation of Atlanta, which has one source of water, Culbert says the water system is not invulnerable.

Lisenby said climate is unpredictable. "We've never faced this situation before. It's taken us over 200 years to get to this point."