Who the hell is Pat McCrory? 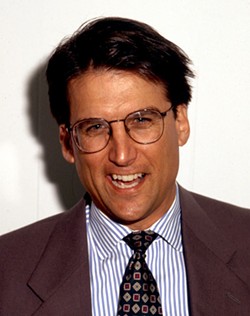 Hood even says that McCrory's entry into the race brings new attention to the contest -- a contest that has been overshadowed by political stories about the next leader of the free world.

Further down the road in Moore County, an area known for the rolling hills of Pinehurst and several PGA events, some Republicans have their minds made up about McCrory.

Bensalem resident Evelyn Hill admits that she doesn't know a whole lot about McCrory, but she's not voting for him.

"What little bit I know about him is that he's a moderate Republican, and I won't vote for him ever," she says. "A moderate is just like a Democrat. And when you can't tell the Saints from the Ain'ts, what's the purpose of having two parties?"

McCrory, however, has history in Moore County. Some say it was at a meeting of the Moore County Republican Men where he first hinted that he would indeed run for governor. This meeting happened about a month before he made the official announcement in Jamestown.

Michael Pies, a Pinebluff resident, says he doesn't know much about McCrory either -- being that he lives two hours away from the Queen City.

But he thinks Charlotte's mayor would probably do well as governor.

"Since Mecklenburg County is the most populated county in the state and Charlotte is the largest city, he'd probably a good job," Pies says. But he stopped short of saying that he'd vote for Mayor Pat.

Though Pies admits he hasn't made up his mind about who to support, he says he'd like McCrory to be a little more conservative.

"Lots of times moderates have a bent toward liberalism," he says. That's why he says he'd more than likely vote for Smith.

"I believe he's the kind of conservative that I feel is a conservative," Pies says. "I like some of the things he stands for."

McCrory, who entered the race in January, seems undaunted by his doubters. He's been on a statewide tour, from the coast to the mountains, meeting people who don't know much about him.

He's touching on issues that he's been dealing with as a mayor and he's been attempting to set the record straight on being a "moderate."

"We've only been running our campaign for three weeks and we've already been to Asheville, Wilmington and Greenville," says McCrory. He's also hit up the Outer Banks, Rocky Mount and Goldsboro.

"So, I'm traveling all over the state during the next several weeks to connect with the people and find out what their concerns are and tell them what my issues are all about."

McCrory says he's finding out that the issues facing Charlotte and things he'd been working on for the last 12 years also apply to small towns.

"We're finding out that issues of creating jobs, issues of public safety, issues of education and issues of transportation apply to small towns and big cities alike," he says. "People are looking for a leader. They're not necessarily looking for someone from where they grew up, but a leader who has a successful track record and a vision for the future."

But what about his reputation? Many in the state consider McCrory a moderate. While that may play well in Charlotte, more conservative areas of the state just aren't feeling it.

McCrory says, "I don't like labels. I think that the pundits love to try and stick a person under a certain title or label, which is often inaccurate. I am a Republican, and I am convinced that people are looking for a leader -- not necessarily agreement on all the issues. I think the best compliment that I get is: 'Mayor, I don't agree with you on all the issues, but you're a good leader.' I'll take that compliment any day. I'm not going to try and appease every interest group in North Carolina. I try to do what is best and let the people evaluate my job."

That's how McCrory describes the way he's run the city of Charlotte over the last decade.

"I have stepped on the toes of the far right and the far left," he says. "I anticipate doing the same thing as governor."

He says that the mass-transit and light-rail issues in Charlotte are examples of him doing what's best for the future.

"Many of the people in my party strongly disagreed with that, but I felt it was the best long-term thing to do for our city and region. I didn't waver, and I think in the long term we will find out that it's the best decision; and we're finding out that it's the best decision in the short term. And ... I've disagreed with the political left on many issues, such as the death-penalty moratorium to the living wage to certain tax increases. I do what I think is best and I'm not going to try to appease every interest group."