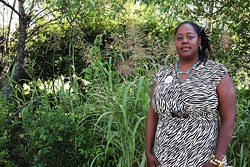 Charlotte City Council District 3 candidate LaWana Mayfield knocks on doors daily, introducing herself to potential voters; she canvases to find out what citizens want from a Council representative and what they're willing to do to make the changes that they want to see. When she's not talking to voters — telling them about the Sept. 13 primary — she's speaking at events like Juneteenth in Independence Park, rallying for immigration rights or marching in the RAIN AIDS Walk.

She may be a political novice, but she's spent the last 15 years working with groups like Charlotte Community Justice Coalition. In addition, she oversaw disaster relief services in New Orleans following Hurricane Katrina.

To be fair, part of the reason that no openly gay official has won a local political post is because so few actually run at all. Since the late 1990s, for example, only a handful of openly gay politicians have made runs for office in the Queen City, including: Owen Sutkowski, who ran for City Council in 2009; Chris Cole, who ran for City Council in 2001 and 2003; and Sue Henry, a write-in candidate for mayor in 1995.

So why don't more openly gay candidates run? According to Richard Thomas, the chair of MeckPac — a non-partisan political action committee working for LGBT equality — gay candidates don't seek office in Charlotte because of three major factors: fear, lack of experience and lack of funding.

"There's not a lot of candidates, unfortunately, within the Charlotte-Mecklenburg area that have typically run that were openly gay or known to be gay," said Thomas. "A lot of that has to do with the stereotypes that are so pervasive in Charlotte. As progressive as Charlotte wants to be, there is this huge river of conservatism that runs right down the middle. What I find as politicians, even LGBT-friendly politicians that are looking to get into office or are currently in office, there is a lack of willingness to support or take lead for changes that would be beneficial to the LGBT community."

Thomas said some in the LGBT community are fearful of losing their jobs when they speak out about issues.

"There may be a few people in the community, and I don't want to give credit to Bill James, that may say: 'Oh, the gay person can't be successful in running for and taking office,'" said Thomas. "It's important that as LGBT people may become more interested in political office that they represent our community and what's the best for the whole community."

When Sutkowski — then 26 — ran for the District 1 seat against incumbent Patsy Kinsey, fundraising was a key problem for his campaign. Kinsey raised $7,876 during the 2009 election cycle to spend on her re-election effort, while Sutkowski raised less than $4,464, loaning his campaign $1,384.

And in terms of experience, Sutkowski's was limited to serving on the city-county Community Relations Committee and the city's Privatization/Competition Advisory Committee.

"When you're coming into a conservative politically charged environment, automatically bringing light to your sexual orientation can put you at a disadvantage, especially if you're looking to unseat an incumbent," Thomas said. "It's a responsibility of our community, the LGBT community, to seek out individuals that would be good candidates, that are LGBT candidates and support them in their effort if they are the right candidate."

Mayfield is trying to position herself to be the kind of candidate Thomas describes.

"I'm not a one-issue person and because I've been on the ground with so many issues of equity and equality, my support in the community is really good," Mayfield said. Since April, she has raised $6,000 for her primary face-off.

"That is a considerable amount, considering that I'm a first-time candidate. But I have a lot of diverse on-the-ground support because people know my work. I don't make promises; my focus is stable, smart and strong. What can I bring to this community that is going to help? That's my focus."

And being out? Mayfield said she doesn't hide anything and all of her work in the community has been done authentically. "It's interesting because how many times is this question asked to any other candidate regarding their spouse and who they are involved with? And how often do you see the spouses of candidates?" she asked. "Ultimately when we have a strong community and we recognize the diversity of Charlotte and embrace that diversity, then we're going to be that world-class city that we aim to be. ... We need transparency. Me running as an out candidate is a part of that transparency. You know exactly who I am."

But is Charlotte ready to accept who Mayfield is? Sutkowski lost the 2009 primary against Kinsey, garnering only 33 percent of the vote — despite picking up endorsements from The Charlotte Observer, The Eastside PAC and the Black Political Caucus.

"We're making steps in the right way, but they're very slow," said Thomas. "There is a lack of support on our City Council. Our county commissioners are a bit more progressive, but then you have folks like Bill James and some others that have very serious convictions. But those personal convictions have a place, and they shouldn't be in government decisions that have to do and affect the overall citizenship of the county."