Will the Factory Cafe Beat the Curse?

With its mix of music, comedy, bars, clubs and restaurants, the AvidXchange Music Factory has always managed to attract Charlotte's night owls. But there were some things that sisters-in-law Tracy Ford and Jacquette Land noticed were missing on the boulevard, one being a restaurant serving breakfast foods to the tipsy late-night crowd.

Ford and Land aim to fix that as they put the final touches to Factory Café, a new restaurant in the heart of the Music Factory that's set to open this week. The café will offer breakfast until 4 a.m., filling the void left when Mattie's Diner closed in 2015. From low-cal smoothies and protein drinks to a patio newly equipped with flat-screen TVs, Ford and Land hope to bring life to a spot in the AvidXchange complex that other restaurateurs have had a hard time keeping open. It's the space at the corner of the circle directly across from La Revolucion.

"This area is really growing and we thought it was a good location for the type of menu that we're opening," says Ford, citing full-service menu that includes breakfast, lunch, dinner, late-night treats and a kids' menu.

Abby Johnson, director of catering of Factory Café, describes the cuisine as "American with a Southern flare."

On tap will be soul food staples like shrimp and grits, fried green tomatoes, biscuits and gravy, mac and cheese, ribs and pork chops, as well as such non-Southern classics as Philly cheesesteaks, cold cuts, burgers and grilled salmon. The restaurant will also open for weekend brunch (with a build-your-own crepe option), which will include live jazz music.

"It'll have an upscale feel with an affordable price," the restaurant's manager, Cecil Dowdell, says. "And the menu's just ridiculous — meaning great." 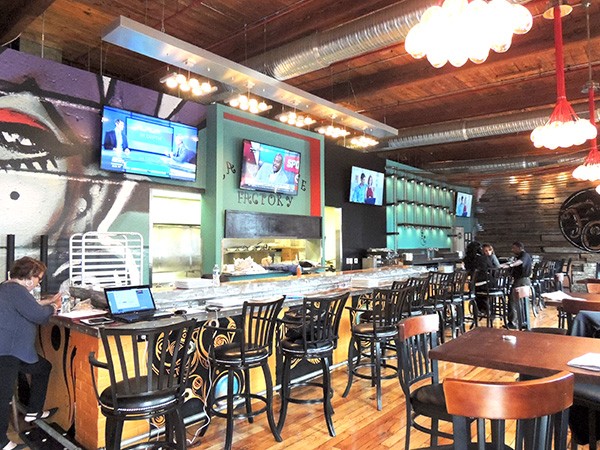 Ford, the café's co-owner and general manager, is sitting under a cascade of ship rope that covers half the restaurant's ceiling and holds the plank wine shelves on the wall behind the bar. The interior has an urban design, with exposed brick walls and hanging Edison bulb light fixtures. Asian-style art covers the bar area from the floor to the countertop to the wall behind it, a holdover from Eight Sushi, the last restaurant to hold this space.

On the wall behind Ford sits a large, custom-made sign built from aluminum sheets, flat driftwood-like panels and a black circle with the Factory Café logo at the center. The concept, she says, was inspired by the News Café, a famous restaurant in Miami.

"We pretty much did a little spin-off here, thinking it would be nice for this area," Ford says.

The space Factory Café occupies has a rocky history, having seen several restaurants fail over the past few years. But that doesn't scare the two women. Ford, who holds a bachelor's degree in home economics, says she and Land will ensure the restaurant's success by employing good customer service and offering what the people in the immediate area want in an eatery.

"We got a lot of suggestions from [locals] as to what they would like to see here," Ford says, citing the low-cal smoothies as well as cappuccino and espresso. She also believes the late-night breakfasts will be a big draw. More than that, says Johnson, Factory Café's ace in the hole is executive chef Jamarr Shular, a California native with years of experience in catering and kitchen work.

"He's fabulous," Johnson says. "He's the only chef I've worked with in my 20 years that doesn't get angry or have a temper in the kitchen." And, she adds with a touch of braggadocio, "He was an executive chef for Apple in Silicon Valley."

Johnson says she has a few marketing ideas in the pipeline, too, one of which is a Music Factory crawl. "What that will entail is having a drink at Wet Willie's, going to La Revolucion and having nachos, coming here for their main course."

Another special offering? "We are also going to do cooking classes at the cafe," she says.

As Music Factory tenants ourselves, Creative Loafing will be the ones most rooting for their success in a space once seen as cursed.