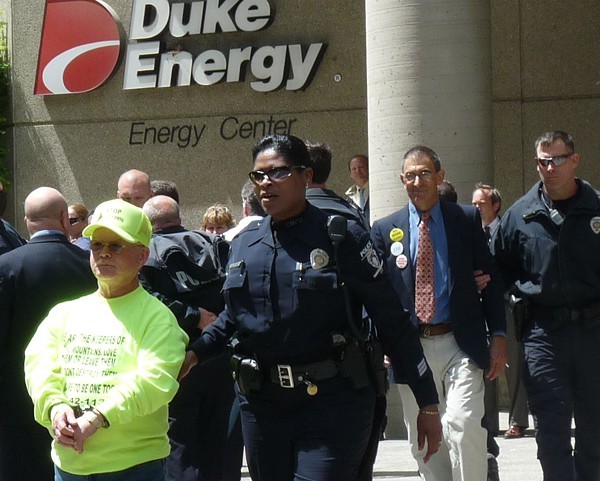 Between Occupy Charlotte, the Democratic National Convention, Duke Energy's ongoing rate hike hearings and the Moral Monday protests in Raleigh, our state is hearing it's fair share of rallying cries.

But is anyone listening?

To answer that question, I checked in with the N.C. Utility Commission, Duke Energy and Greenpeace after two rate-hike hearings - one in Charlotte and one in Hillsborough - held in less than two weeks. (By the way, expect more protests this week during the commission's final hearing on the topic in Raleigh, slated to take all week.)

You won't be surprised to hear that Monica Embrey, of Greenpeace, is confident protesting does makes a difference. While her group didn't kick off the Duke Energy rate-hike protests, which have been going on for a couple years, it is on the front lines of the fight now.

Embrey said protestors not only pushed the N.C. Utility Commission into holding a Charlotte hearing for the Duke Energy's 20-year plan (the commission usually only holds one, in Raleigh, of course), but the protestors have nearly won the rate debate, too. For example, in October 2011, at the first rate-hike hearing in Charlotte, the company was still pushing for a rate increase of 17.4 percent for residential customers. The more recent number, environmentalists estimate, is 9 percent.

(It's important to note that there is some disagreement on the numbers. The official line is 4.5 percent, increasing to 5 percent in two years, but environmentalists insist that once calculated honestly, they've got their math right, and industry and the government are spinning things to make it seem like the rate hike is lower than it actually is.)

Whatever the actual number, what's clear is that Duke's rate won't be as high as it once wanted it to be, according to the Charlotte Observer in an article published last week:

Duke Energy Carolinas originally requested a $446 million annual rate increase in February, but is now willing to take less than half that amount.

The daily even ran "Duke Energy's rate hike takes a beating at hearing" as the headline of the story that detailed Charlotte's last rate-hike hearing.

Did all the protesting make the difference? Perhaps, but when I asked Duke Energy spokesman Jeff Brooks that question, he emphasized the value of input from customers at hearings, not necessarily the messages coming from groups outside the meeting. Here's what he told me:

Input from customers plays a very important role during a rate case. As part of the rate-making process, our regulators typically schedule hearings to hear from the public about the utility's rate proposal, quality of service and other matters that might affect the request for a rate change. This input is part of the official testimony in the case and helps regulators during their review of the utility's request. Duke Energy also wants to hear from customers during this process. Our teams attend public hearings and are eager to listen to customer testimony and speak with customers to hear their thoughts, concerns and resolve any service issues they may have experienced.

Sam Watson, general council for the N.C. Utility Commission, said that the commission can only consider evidence and testimony that is entered into the official record, which you can peruse here. "We go out there and give anybody who wants it a chance to testify," he said, adding, "we cannot base our decisions on what's outside of the record. We do expect people to behave in the courtroom."

So the official answer, according to officials and business types, is that protesting doesn't count - not really, anyway. You can enter the hearing room and shout, but you'll probably be escorted out. If you're shouting in the streets you may not be heard at all. Not officially, anyway.

Watson said that he can tell that environmental and consumer groups - including the AARP - are mobilizing citizens and encouraging them to speak at hearings. "That's what matters," he said.

Not all protestors testify, but many do.

For Embrey, testifying is as important as spreading the word about the rate hike and hearings.

"Every day folks are calling and texting and facebooking their friends, so we are reaching a bigger and broader audience, and at every event we have there are new people," she said.

The protestors - who are essentially acting as volunteers for environmental groups - attend hearings around the state. "It's a really big commitment and a very big sacrifice," Embrey said. "We're getting back at 11 p.m., midnight and once even at 2:30 a.m."

I asked her who the group's ultimate audience is: Duke Energy, the commissioners or the people?

"It's hard to say," she admitted. "It's definitely important that we're able to get the word out so that people learn what the rate hikes are for." (For the record, she added, the hikes are for two nuclear plants, a coal plant and a natural gas plant.)

Something that should make the protestors feel better, even if the official line from the commission and the company - if in a more subtle way - is that protestors aren't heard unless they sign up to speak at a hearing, is that the state attorney general is on their side, and has been all along.

Affording to a story from the North Carolina News Network:

Attorney General Roy Cooper has filed an appeal with the state Supreme Court in the hopes of getting the rate increase repealed.

... Cooper says this increase is a sign that Duke Progress Energy has been focusing on its shareholders more than its consumers.

"I know one thing," Embrey said. "If we don't do anything, nothing will change."