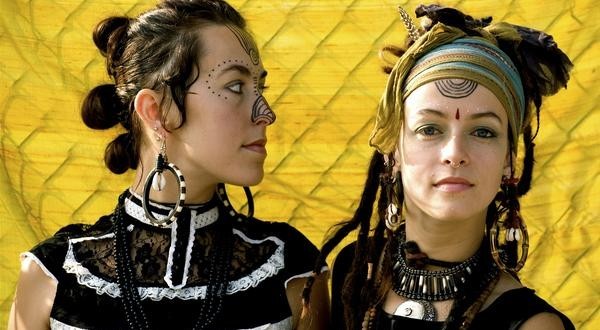 "Y'all are a small but mighty fierce crowd," Rising Appalachia's Leah Smith told the exuberant audience in the half-packed hall, the crowd's enthusiasm undimmed by a dismal rainy Saturday night. "You're five times louder than our last few crowds who were five times bigger."

With that, Leah and younger sister Chloe, backed by guitarist/bassist David Brown and pan-cultural percussionist Biko Casini, launched into a funky, swaying and syncopated take on the proto-folk-and-blues nugget "St. James Infirmary." With Brown's rubbery upright walking bass and Casini's late-night jazz djembre,there was a lot going on onstage, including an artist seated stage right painting a sprawling canvas.

Yet focus remained rightly where it belonged, on Leah's and Chloe's contrapuntal dual lead vocals and harmonies both keening and caressing. On a cappella set opener "Mississippi Song," their tandem voices entwined and diverged like the mighty river itself. Not that the Smith sisters were slouches in the instrumental department. On the N'awlins traditional "All Fences and No Doors," Chloe's sawing fiddle and Leah's percolating banjo swirled in the eddies of Brown's whirl-pooling guitar. It was a hypnotic dance of flowing fiddle and finger-picked strings that mirrored the spiral circle tats on Leah's shoulders.

Rising Appalachia's set included many covers, yet those trad chestnuts were as fresh as the sisters' original compositions, including the life-and-activism affirming "Scale Down." Leah and Chloe were trained in classical and jazz piano, and they brought a musicologist's ear to their arrangements which seamlessly traced a rhythmic thorough-line from West African harmonies and beats to America's mountain music.

Yet there was no air of the dusty archivist in the band's onstage celebration. Traditionals by long forgotten authors, like the mournful mountain hymn"Oh Death", turned cutting edge and contemporary with bracing hip-hop infusions and syncopated instrumental firepower.

The crowd hushed as Leah and Chloe launched into the Celtic a cappella harmonies of "Across the Blue Ridge Mountains." As Leah's high, lonesome alto delivered the desperate line, "Wouldn't it be dreadful for my man and me to part?" A little girl in the audience laughed. Without batting an eye, Leah smiled and gave the youngster props for being such a wise feminist, hoisting the kid onstage to share the spontaneous moment with everyone.

The sisters' communal and activist side arose on the title cut of their latest album, Filthy Dirty South. A strutting Le Hot Club jazz arrangement and the sister's keening siren song sharpened the song's message to save our southern lands and waters: "If you muddy my water, than I will come after you." In the wake of Duke Energy's diligent cover-up of dumping coal ash toxins in our water supply, the point hit home with the crowd.

Yet the political bulletin was not jarring, since activism has been entwined in Rising Appalachia's music and world outlook since day one. As Leah half-jokingly noted as a shot of liquor was delivered onstage from the bar, their songs have always been about three things: politics, love and whiskey.

Asking for silence, the sisters emerged unaccompanied for a sacred, gospel-infused "Closer Walk with Thee." By turns soothing and soaring, the Crescent City stand-by turned startlingly fresh, especially when the sisters included a jaw dropping "horn section," mimicking the onomatopoeia of trombone and muted trumpet with mouth and hands alone.

If Rising Appalachia's conjoining of art, poetry, activism and community can be summed up in one word, it is this: Magic.