John Schacht has been writing about music since the Baroque era. He's interviewed everybody from Stevie Ray Vaughan (total dick) to Panda Bear (nice enough). He teaches a UNCC course called "Pop Culture & the American Music Scene." He managed a record store for a couple of years and spent an entire paycheck on the Brownie box set (even with the employee discount). He has "thank you" notes on his wall from Yo La Tengo's Ira Kaplan, Jim White (the Wrong-Eyed Jesus dude, not the Dirty 3 drummer), the Lou Ford boys, and Marianne Dissard, a French-born singer he finds magnifique. He wishes Mark Linkous and Rodney Lanier were still around. He was Editor in Chief of Shuffle from 2007-2011 -- a magazine he started -- and now serves as its Managing Editor. He's had spiritual epiphanies (some sober, some decidedly not) listening to Coltrane's "Afro Blue" (the Live at Birdland version) and Califone's Quicksand/Cradlesnakes. He's judged a high school Battle of the Bands. He plays guitar, though not particularly well. He once bought a nice used car with a freelance paycheck, and wishes that happened more often. His cat's name is Mingus. He (me, not Mingus) has written for national publications (Paste, Harp, Blurt) and alternative weeklies from Ohio and California to Florida and Tennessee. He's been covering the Charlotte music scene since the late 90s, and did a truncated stint as Music Editor at Creative Loafing from 2003-2005.
Contact Us

Doing It Themselves Local Promoter Puts On A Show for Hungry Punk Bands January 07, 2004 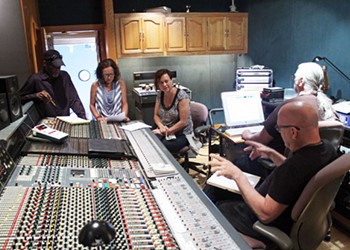 A Murmur of Reflection (Sound Studios) Legendary Charlotte studio is set to close its doors June 05, 2014