There´s A TV In My Dvd Player!

CL's picks of the best television on DVD 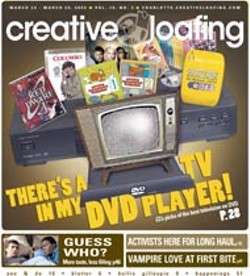 The advent of DVD may have been the best thing to happen to film geeks in a long time, but it hasn't worked out too shabbily for couch potatoes, either. Much has been written about DVD being a boon for the movie industry, grinding the once omniscient videocassette market into the ground by offering films with improved picture and sound, not to mention all those nifty extra features. But the real out-of-left-field surprise has been the booming business of TV shows on DVD.

Recent numbers are staggering. A Merrill Lynch report issued at the end of 2004 revealed that DVD enthusiasts spent $2.3 billion last year buying television programs on disc. Approximately 500 boobtube features — everything from TV series to cable movies to educational programs — were released in 2004 alone, and Video Store Magazine reported that because of the wide range of product, TV shows accounted for 10 percent of all DVD sales. Even a glance at Amazon.com reveals that 18 of the site's 50 current bestsellers (at press time) are TV boxed sets. Considering that many of these sets are comprised of TV shows that people have always been able to watch for free, that's a pretty impressive chunk of change.

The reasons for this sudden burst of popularity are varied. For one thing, it gives baby boomers an opportunity to relive — at their leisure — the beloved shows that steered them through childhood. For another, it allows younger viewers to catch narratively weighty series in as few sittings as they like, rather than having to wait week to week for the latest cliffhanger installment (shows such as Alias and 24 have flourished on DVD for this very reason). Not to mention that it gives consumers a chance to go back and catch short-lived series they heard about but never found time to watch. (One example is the cartoon series Family Guy, whose DVD sales were so strong, the show was actually brought back to the air after being cancelled.)

But the best reason? Read my lips: No commercials.

With so many titles flooding the market, we at CL, out of the goodness of our hearts, decided the time was right to tell you what you should watch. So here are CL editorial staff members and contributors' selections of our favorite shows currently available on disc. You'll find a wide range of works, from cherished classics to contemporary hits to quirky cult items, but you won't find bestsellers you probably already have (CSI, Seinfeld, The Sopranos, so forth). We've also provided a list of Should-A Beens, shows we're disappointed aren't on DVD (at least not yet). Have fun.

WHAT'S SO GREAT?: In the world of espionage, where duplicity is the name of the game and allegiances can shift at a second's notice, CIA agent Sydney Bristow (Garner) must use her wits (and arsenal of disguises) to remain a half-step ahead of the enemy. Garner and Garber (as her no-nonsense agent dad) head the talented cast of a brainy, fast-paced show whose character dynamics are even more compelling than the cloak-and-dagger material.

BEST SEASON: Season 2, which, in one shocking episode ("Phase One"), uprooted the direction of the entire show and killed off a major character in the process.

WHAT'S SO GREAT?: Columbo was actually only one of three programs showcased on The NBC Mystery Movie (the other original rotating shows were McCloud and MacMillan and Wife), but it quickly proved to be the most popular. That's primarily because of Falk, who is wonderful as the trenchcoat-wearing detective whose disheveled appearance and fumbling manner were in contrast to the brilliant mind that always made sure the killer was nabbed before the end credits.

BEST SEASON: The quality is consistent over these first two seasons, but the Season 1 box set gets the edge because it includes the two Columbo TV movies that preceded the series — 1968's Prescription: Murder and 1971's Ransom for a Dead Man — as well as the episode ("Murder By the Book") directed by a rising filmmaker named Steven Spielberg.