6 Yoga Exercises Which Can Effectively Complement Your Writing Routine 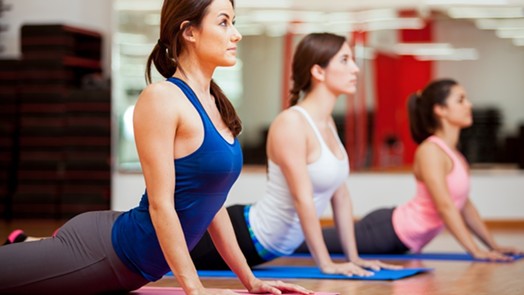 As a writer, have you ever thought about introducing some basic yoga exercises into your daily routine to help you unlock imagination and boost productivity? You may just be missing a trick.

Spending a little time on your body and mind can truly lead to a mindset which lends itself perfectly to the writing task at hand. Performing regularly yoga can also help greatly with physical challenges such as postural problems that are created from writing at a desk for large parts of your day.


Here are six yoga exercises that you could build in from the comfort of your writing space:

This is the logical place to start because this pose is all about fighting against that slouched posture that becomes commonplace as people lean over a desk. It’s highly recommended to office workers and writers who need to strengthen their core and focus attention on the upper back, which bears the brunt of the pressure from that slumped positioning. This pose actually stretches a fantastic array of muscles and joints, from the calves in the back of your legs to the spine.

Again focusing on a part of the body that build up tension in the course of your day. The neck often feels the most serious effects of a writing posture, and regularly stretching this part of the body can help relieve any build up. It’s a simple activity which involves stretching your neck out both sides and getting in tune with your breathing. It’s highly recommended that you do this out of your writer’s chair on a yoga mat or even on the edge of the bed or another comfortable place.

As it would suggest, this pose sees you lying prostrate, and because of that can be incredibly stress-relieving. It’s a good option to include at the end of your day, or at particularly stressful moments of the writing process where you are starting to develop headaches from the activity. “The corpse pose can actively ward against mental and physical fatigue, and is recommended to people who operate in any kind of stressful environment or find themselves with tasks that are mentally consuming” enthuses Carrie Tobias, a productivity blogger at Academized and EliteAssignmentHelp.

Performed standing up, these circular hip motions are great for getting movement back into the core of the body and relieving the pressure build up from those stressed part of the body such as the shoulders and neck. Remember to flex your knees and shake out that tension in between the circles that you perform.

This interestingly named yoga position is known as a re-energizer and could work perfectly as part of your writing routine. It is recommended for calming the brain after strenuous periods of concentration (such as those writing would bring about) and it works on an incredible array of body parts and muscles, including the shoulders, calves and hamstrings. It’s positive effects on fatigue and mental stress are regularly espoused among yoga practitioners, and should be used best in the middle of your day when you need an injection of energy to get you through the next bout of writing. As for the pose itself, it’s similar to a press-up where you envisage pushing the floor part through the collaboration of your hands and feet.

This is another yoga pose that is highly recommended for those who spend long periods sitting. Sitting down for extended periods actually tightens the hamstrings up the back of the legs, and this pose combats that build-up of tension. Loosening the hamstrings actually assist in loosening up the back too, which is another part of the body which will be under worked and over-stressed from long periods of sitting.

It’s highly recommended that you take a few classes with a qualified yoga instructor in your area who can show you these poses and others which can specially help combat the unique pressures and tensions that are built up over the course of a day spent writing.


“The beauty of yoga is that it is accessible to everyone, and once the techniques have been demonstrated and appreciated, they can be performed absolutely anywhere, helping to maintain both a healthy body and stress-free mind which is optimum for the task at hand,” says Rita Parthan, a writer at BigAssignments and OxEssays.


Please note that if you have any existing injuries or medical complaints then you should consult with a yoga teacher before undertaking any of these poses, as neck injuries in particular can be exacerbated with the wrong pose. Similarly, make sure you are using an ergonomically designed chair and have your desk at the optimum height to prevent injury caused by sustained periods in pressure-building postures.


Lifestyle writer Ellie Coverdale can be found at UKWritings.com and BoomEssays.com, where she contributes insightful articles on a variety of subjects. Those include parenting, education, holistic lifestyles, and helping you to achieve your personal and career goals. Ellie is also a tutor at Essayroo.com.