Spiegelman's first book since Maus is a stunner 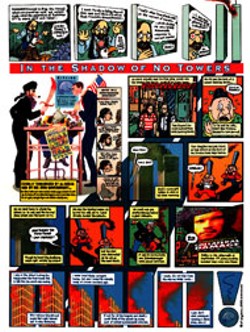 In a lengthy 1995 interview for The Comics Journal, while reflecting on the success of Maus, his Pulitzer Prize-winning graphic novel detailing his father's struggles for survival during the Holocaust, the cartoonist Art Spiegelman approvingly quoted the novelist Margaret Yourcenar: "The only way for art to happen is to have the confluence of personal and social history."

In Maus, Spiegelman experienced that confluence of personal and social history through his difficult relationship with his father. On September 11, 2001, he experienced it again from his home in Soho in lower Manhattan, a few blocks south of the World Trade Center. As Spiegelman notes in the first of the 10 large-scale comic strips that comprise his new book, In the Shadow of No Towers, "Those crumbling towers burned their way into every brain, but I live on the outskirts of Ground Zero and first saw it all live -- unmediated."

Spiegelman's attempt to comprehend that vision fills the sprawling pages of In the Shadow of No Towers. But this is also an odd hybrid of a book. Though several early strips hint at a narrative, following Spiegelman and his family through the first minutes of 9/11, this isn't properly a graphic novel. Unlike Maus, which was driven by the twin storylines of Vladek Spiegelman's experiences in the Holocaust and Art's difficult relationship with Vladek in the present, In the Shadow of No Towers quickly becomes a kind of graphic journal, a record in comics form of his reactions to 9/11 and the descent into war in Iraq afterwards.

Though it's a fierce polemic and a painfully funny depiction of the damage of 9/11 to Spiegelman's already precarious psyche, In the Shadow of No Towers is also an undeniably beautiful book. Simply in terms of presentation alone, it's an impressive work. Its starkly elegant cover image evokes the iconic New Yorker cover that Spiegelman created shortly after 9/11, showing the black silhouettes of the towers against a black background, though here that image is broken in the center by a slender brightly colored panel, which shows a crowd of the vintage comic strip characters who inhabit Spiegelman's consciousness in this book, all flying through the air and crashing down to earth. Its pages too are enormous, 14 and a half inches in height and printed on heavy cardstock paper, so that the book opens up to present each of the 10 strips as an even larger double-page spread.

Yet what's most striking about the book's sheer artistry is Spiegelman's virtuoso demonstration inside, on page after page, of the distinct creative language of that least understood indigenous American artform: comics. In the 1995 interview referred to above, he spoke of his interest in the formal properties of comics -- "things like panel size," he explained, "the rhythms that happen on a page, where your eye is driven across a page" -- but he acknowledged that such concerns were subordinated to the storyline in Maus (though Spiegelman also argued that the "subliminal" effects of his use of such devices contributed to the success of Maus). Perhaps because the events of In the Shadow of No Towers defy the comforting logic of a traditional narrative, Spiegelman's mastery of form surges to the foreground here, as if it's his only way to impose any sort of order on 9/11 and its aftermath.

With the broad canvas of his oversized pages to range across, Spiegelman displays an extraordinary sense of design. Each strip presents a collage of different comic styles and panel arrangements -- like his own "fragmentary thoughts," Spiegelman says in his introduction. At times, Spiegelman represents himself in a cartoonish but recognizably human form; at other times, whenever his experiences on 9/11 recall his parents' experiences in the Holocaust, he's again the mouse of his earlier book. Angry caricatures of George W. Bush and Osama Bin Laden jostle side by side with images from the old comic strips that Spiegelman turned to for solace after 9/11 (some of which are reprinted in a beautiful comics supplement in the back of the book). Pages can be read vertically or horizontally, with different tiers of panels, rendered in different styles, competing for our attention. The whole thing threatens to fly apart on every page, a wild chaos of styles and ideas, but Spiegelman's sense of design always prevails.

The book is also held together, though, by its outraged and mournful tone. Spiegelman's experience of 9/11, "unmediated" by television cameras or the reassuring tones of network anchors, leaves him astonished at the way the memory of the attacks is corrupted by "a bombardment of kitsch" on its first anniversary and exploited by an administration bent on war. Near the end of the book, he labels the invasion of Iraq a "weapon of mass displacement," intended to displace anxiety about Al-Qaeda.

Most of all, however, Spiegelman uses his pen and brush here to assault what he calls, on his first page, "the New Normal." In a deft display of the simplicity and power of comics, we immediately see a sequence of three silent panels that first shows a family dozing comfortably in front of their TV on September 10; then, still on the same couch, their hair on end and their eyes agape on September 11; and, in the third panel, the family asleep again in front of the TV, their hair still partly on end, though now with an American flag on the wall behind them. For Spiegelman, the New Normal is a toxic mixture of unthinking patriotism and uneasy complacency that endangers the future and diminishes the past. As he writes in the last three panels of the last strip, shortly before the second anniversary of the attacks, mournfully closing his own powerful and affecting memorial, "The Towers have come to loom far larger than life . . . but they seem to get smaller every day . . . Happy Anniversary."

Michael Kobre teaches literature and American Studies at Queens University of Charlotte, where he is On-Campus Director of Queens' low-residency MFA program in creative writing. He will teach a course on comics and graphic novels in the Hayworth College at Queens this spring.