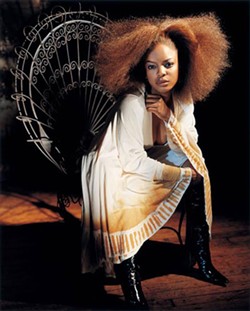 More than two years ago, Karen Lee, former publicist for Tupac Shakur, Jaheim and Me'Shell Ndegeocello, tipped me to the talents of Leela James. Seemingly born to a musical lineage that includes the late Lynn Collins, Ann Peebles, Betty Wright and Lauryn Hill, James's sound was so unique that the singer's label didn't quite know what to do with her. So it was off to "urban radio finishing school," which in the current environment means the label imported a few hot producers of the moment -- Kanye West, Raphael Saadiq and Wyclef Jean -- to make James' decidedly "back porch" soul a little more accessible to the masses. The product, A Change is Gonna Come, was finally released in June. James brings her act to Amos' SouthEnd on Tuesday.

Born and raised in Los Angeles, James is another example of a contemporary performer raised on "the crates" of her parents. The James family record collection contained the usual canon of soul and gospel music: Al Green, Shirley Caesar, the Staple Singers and LA's Mighty Clouds of Joy. So the young James, following the approved script for the "next great" whatever, grew up singing in church. It's easy to suspect that somebody is laying it on thick with James; after all, A Change is Gonna Come was boldly named for the Sam Cooke classic. But once you hear James' voice, it's obvious this approved script is no mere marketing ploy. In the lexicon of righteous blackness, Baby-girl can "sang." Or as she puts it, "You can't fake or buy soul... It's either in you or it isn't."

James signed with RuffNation/Warner Bros. four years ago. When the parent company went through a process of consolidation, RuffNation folded and the singer's career was at the mercy of a new set of record execs. Fortunately for James, she co-wrote virtually every track on A Change is Gonna Come (along with primary collaborator and executive producer Gordon Williams) and thus was undaunted by the label drama. She had the goods to take elsewhere if Warner no longer proved hospitable.

The major label obviously didn't steal James' soul, as her disc's only cover, a remake of No Doubt's "Don't Speak," makes plain. The song documents the romantic breakup of No Doubt band mates Gwen Stefani and Tony Kanal. Much like Jaguar Wright's Divorcing Neo 2 Marry Soul, James' take on the No Doubt classic can be read as James' own final break with corporate-driven R&B. The opening track, "Music," also alludes to this, with James lamenting, "Where did love of music go/It's all about the dough."

Though some urban audiences have become familiar with the deep soul drawl of male vocalists Ricky Fanté and Charlotte natives Calvin Richardson and Anthony Hamilton, their female counterparts such as Syleena Johnson and James typically struggle for regular spins on urban radio and video networks. This is not surprising in an era in which a "hot" music video accentuating the hyper-sexuality of female R&B vocalists is the status quo. In James's case, her "heavy" voice betrays the typical image of the svelte twentysomething with high-pitched pipes (recall singer Michel'le more than a decade ago). As James told the Chicago Sun-Times, "People tell me all the time that I sound like a big, fat woman." The world of R&B rarely rewards those who don't play the game; even Alicia Keys had to come correct with the grown and sexy vibe. There may be nothing inherently wrong with this, but if James actually resembled the "big, fat women" she sounds like, there would probably be little interest in her work beyond the rare grooves cult.

Industry politics aside, A Change is Gonna Come is a fine tribute from a vocalist who is well-versed in the full range of R&B styles. The recording's closing suite, which riffs on the themes of change -- Sam Cooke's "A Change is Gonna Come" interspersed with the old-school gospel of "I Know I Been Changed" and "Long Time Coming" -- shows James' ability to work gracefully through musical eras. James calls her style "back porch soul" because "it's a style of music that's homegrown, reminiscent of a time where folks sat around on those hot, sticky days on their porches singing and playing the blues." She adds, "It's a style that's gritty, that's raw, not contrived or watered down... it's in my roots, it's who I am."

Even when James's music is blessed by the urban-friendly production of Wyclef Jean ("Ghetto") or Kanye West ("Didn't I"), none of the grits and gravy gets lost. One of West's productions, "It's Alright," is arguably one of the finest tracks and has little to do with West himself.

James's A Change is Gonna Come may not save contemporary R&B, but her music, alongside the music of artists like Hamilton, Philly husband-wife duo Kindred the Family Soul and rising soul-folkie Anthony David, will likely save your soul. In the long run, that might be more important.

Mark Anthony Neal is the author of four books on music and popular culture including Soul Babies: Black Popular Culture and the Post-Soul Aesthetic (2002). He is associate professor in the African & African American Studies department at Duke University.