Redemption of a Native Son 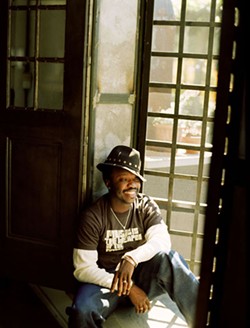 When Anthony Hamilton released the Grammy-nominated Coming from Where I'm From in 2003, Charlotte may not have been seeking another native son to claim. But with the recent release of Ain't Nobody Worryin' -- arguably the best R&B recording of 2005 -- the city no longer has any choice but to fete him and his acclaimed revival of country soul.

And Hamilton, to his credit, makes no bones about being a Southern boy, even as images of the so-called Dirty South become more about selling records than dealing with the rich regional cultures that emerge from the South. Many think of Hamilton as the redemption of contemporary soul music -- as embodying the reemergence of the Soul Man tradition. All Hamilton wants is some personal redemption and perhaps a little church salvation. And when he comes home to Ovens Auditorium on April 9 with aspiring black alternative artist Van Hunt, that will be Hamilton's sole plea.

In these iPod days, it's perhaps cliché to talk about the Soul Man mystique. Indeed, it was soul men of the 1960s and 1970s -- Sam Cooke, Wilson Pickett, James Brown, Marvin Gaye, Al Green, Isaac Hayes, Donny Hathaway and Bobby Womack, to name a few -- whose presence rivaled that of their "race man" peers -- think Malcolm X, Stokely Carmichael (Kwame Ture) and Martin Luther King Jr. With a seeming devotion to drama, misery and love unrequited, the voices of the soul men brought to life the duality of being black and American -- their unreconstructed masculinity firmly planted at the crossroads of desire and derision. Attempts to reclaim the revolutions (both musical and social) that these men conjured has led many of us to anoint recent rising stars -- D'Angelo, Maxwell, John Legend, Musiq, Ricky Fante, Calvin Richardson and yes, Anthony Hamilton -- as the prophesied heirs to soul men long gone. Yet with the soul vaults now open for digital plundering, the mystery has been unveiled. The aforementioned soul forefathers didn't possess some magic stick (no matter what 50 Cent tells us) but simply felt compelled to share with the world their own desires for redemption, even as their music demanded such redemption from the nation.

Part of what makes Hamilton so appealing among the new breed is that his stories are never far from home. Meaning everybody's home -- like the regular cat who puts in his eight hours a day with a lunch pail and a pair of overalls, knowing that he's in the life thing for the long haul and that there are no quick fixes on the come up. Longtime cultural critic Greg Tate has said that Hamilton treats his career "like a real job -- he tours, he records, he writes, he tours, he keeps it moving." Indeed, Hamilton's career has been a testament to staying on the path; Coming from Where I'm From dropped after a decade of false starts. In the aftermath of that recording's success, one of Hamilton's earlier projects, Soulife, was finally released a few months before Ain't Nobody Worryin' hit the stores. Both are reflective of Hamilton's storytelling abilities.

Not surprisingly, Hamilton honed his storytelling skills in quite a different site of artistry: the barbershop. As he recalled in a recent conversation with forebear Bill Withers, published in Interview magazine: "If you're a young man and you're about to go out in the world, go to the barbershop and just listen. Sit back and take notes." Take notes he did, as Hamilton seems to have thousands of life stories to musically draw upon -- the common denominator between them all being the desire for some semblance of personal redemption.

Such was the case in the title song on Coming from Where I'm From, where Hamilton sings of wanting to transcend the limits of family and social legacies: "Too scared to have kids and do like daddy did/'Cause I'm so scared of failing." On his latest disc, redemption is also reserved for the have-nots, so a track like "Ain't Nobody Worryin'" reflects the post-Katrina landscape. Hamilton doesn't go out on Kanye's limb but he knows as well as anyone that beyond political platitudes, few people really do care about the homeless, the displaced and the impoverished.

Ain't Nobody Worryin' also reflects new love in Hamilton's life. The singer recently married gospel vocalist Tarsha' McMillan, who makes an appearance on "Preacher's Daughter." According to Hamilton, his marriage is not just about getting to know her but also getting to know God, as the duo pursues a "Christian life." Thus, Hamilton's music is now also a tool for spiritual salvation as reflected in the gospel ballad "Pass Me Over." Easily the most affecting song in Hamilton's catalogue, "Pass Me Over" was inspired by a friend who died of sickle cell anemia.

The brilliance of Hamilton's work lies in the way he seamlessly weaves the secular with the spiritual. Thus, the closing track, "I Know What Love's All About," is ostensibly about a man coming to terms with the demands of a loving relationship, but it becomes a moment of clarity in which "love" becomes the vehicle for his ultimate salvation.

Still, it's not as though Hamilton ever allows us to forget that he makes his money by providing the ladies with swoon and swirl. Old-school ballads like "Never Love Again," "Change Your World" and the Frankie Paul/Gregory Isaacs-inspired "Everybody" echo country soul's glory days, though Hamilton strives to embody the more enlightened spirit of the New Black Man rather than wallowing in the macho of yesteryear. The music -- and his aptly named Change Your World Tour -- reminds us that our still-imperiled nation can only be redeemed through revolutions in our private selves first.

Anthony Hamilton may be Charlotte's new favorite son, but for so many others he's the redemption of a musical style that really did help to change the world.