A look at Charlotte's Tea Party

Are local grassroots conservatives all that different from Occupy Charlotte? 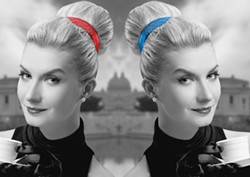 Let us tell a story of an oft-leaderless group of protesters who meet in public parks in costumes, carry signs and shout about government injustices. A group that split over differences of opinion only to then begin educating its masses on the inner workings of government and American history. A group that feels misunderstood by the media. You'd be forgiven for assuming this was another Occupy story. It is not. This is a story of the Charlotte Tea Party, which — depending on whom you ask — is three to five years old and continues to push forward.

The Tea Party, of course, is the conservative-slash-libertarian movement credited with flexing its political muscle during the 2010 election, ousting leaders from long-held congressional seats and filling those seats with tea. In Charlotte — a blotch of blue in an otherwise red area of North Carolina — the Tea Party has had more difficulty placing its members in office.

What seems clear to everyone interviewed for this article is that 2012 is a make-it-or-break-it year for the Tea Party. On one side are the social conservatives, and on the other, fiscal conservatives. Tim Doran, chair of the Mecklenburg Libertarian Party, would like to see the Tea Party focus on fiscal issues. "If the Tea Party were to keep a very narrow view of limited government," he says, "they would gain a lot of support across party lines."

While no one CL talked to for this piece believes there are any true Tea Party members in elected office in the Charlotte-Mecklenburg area — other than Charlotte City Councilman Warren Cooksey, who self-describes as a Tea Party member — Bitzer says that doesn't mean the movement isn't making its mark. He believes the group's focus on local issues will make the biggest difference.

Tea Party members from the group Common Americans United to Inspire Our Nation (CAUTION) recently spoke out against the city's decision to subsidize Chiquita's move to Charlotte as well as the proposed city ordinances for the Democratic National Convention. CAUTION is a branch of the area Tea Party movement that was formed, according to its website (ProceedWithCaution.us), "as a response to Glenn Beck's 9/12 project." Beck's project describes itself as "a non-partisan movement focusing on building and uniting our communities back to the place we were on 9/12/2001."

Groups like CAUTION, says Bitzer, are the best way for local Tea Party-leaning voters to make an impact. The only time national issues are injected into local movements, Bitzer adds, is when there's a candidate to back, but the greatest impact of the local Tea Party is its "ability to organize and channel energy."

Councilman Cooksey agrees that channeling energy into local action is the way to go. His advice to anyone running for office is to start attending government meetings and volunteering for vacancies on boards and commissions. "Gain experience and contacts, and give it time," Cooksey says.

That seems to counter to what most people read or hear about the Tea Party. The mainstream media tends to focus on the Big Money behind the group — from the Conservative Koch brothers, nationally, to Art Pope in North Carolina. CAUTION president Dennis Peterson says that hasn't made much of a difference to the Charlotte movement. "We fund ourselves," he says. "We don't take money from outside sources," although the group accepts voluntary donations during its Monday night meetings at Dilworth Neighborhood Grille. Peterson does disclose that he plans to attend a political leadership course that has received funding from Pope.

In 2011, Peterson lost a bid for City Council. He raised a total of $10,327.70 for his campaign, including several contributions from his family. None of the contributions seems to have been attached to Pope or the Koches. Peterson's biggest concern locally is a growing apathy among potential Tea Party voters. "People are just sick of politics," he says.

What remains unclear about the Tea Party is exactly how the group got its start nationally. Some credit the libertarian zeal of Ron Paul and say the movement started in 2007. Others say it began in earnest after CNBC's Rick Santelli went into a full-on rant on live TV in February 2009, calling for a Tea Party — an "occupation," if you will — on the floor of the Chicago Board of Trade. Soon after, protesters were showing up on Charlotte-area public lands — including Old City Hall, future home of Occupy Charlotte — demanding lower taxes, smaller government and issuing the warning, "Don't tread on me."

Matthew Ridenhour organized those early Charlotte Tea Party rallies — each attended by a few hundred people — in the spring and summer of 2009. He's also behind CharlotteTeaParty.org. (CL reached out for a comment from Ridenhour, but he did not respond by press time.) It wasn't long after those first few rallies that the group split into several factions, with CAUTION seeming to take the lead.

While plenty of left-leaning voters suggest the Tea Party was created to oppose the election of the nation's first African-American president, Peterson disagrees. He cites the federal stimulus bill as the main driver, saying he'd "like to see the government live within its means." Peterson blames the mainstream media for the assumption that "our motives were solely race-based," and adds, "that's not what drew me in. What drew me in is that the government is out of hand." He suggests the racist material depicted in many media stories about the Tea Party "was planted. We were holding up signs that read, 'Not with us!'" Those signs, he says, rarely made the news.

"It's a lot easier to attempt to marginalize your opponents than to attempt to deal with the issues in an adult manner," Peterson says.

That marginalization, Hine says, is what led Tea Party members to eventually agree "that the time for rallies was over," although he credits the protests with bringing normally independent-minded Republicans together under a larger social umbrella.

Hine sees a third wing of the Tea Party. In addition to the libertarian wing (the more fiscally minded, anti-war, anti-big government and pro-freedom voters) and the social conservative wing (fundamentalist-minded voters), Hine sees what he calls "disaffected Democrats" — voters who are tired of corruption in politics and corporate involvement in government.

The story of the Charlotte-area Tea Party, then, is not that much different from the story of Occupy Charlotte. What binds the three branches of the Tea Party — and, by extension, the members of Occupy Charlotte — are the nation's money matters, and the collective concern, according to Hine, that "the power is not with the people, where it should be."