Who says politics can't be sexy?

By Megan Henshall and Photos by Jeaumane McIntosh

We the people of Creative Loafing, having considered all nominations for Lust List 2012, cast our ballots and tallied the numbers. We now hereby present to you, the people of Charlotte, CL's official choices for the hottest, most intriguingly lustful, licentious, and libido-inducing (not to mention smart) Democrats in town. OK, it wasn't really quite like that: You nominated, we deliberated, and these are the folks we liked the most. Not only are these guys and gals beautiful and talented, but they also fulfill their social responsibility to vote. (Swoon!) You may ask: Why only registered Democrats? In view of the big year the Queen City has in store as hostess of the Democratic National Convention, it just made good sense for us to celebrate sexy in blue. (Don't fret, GOP. When your convention comes to town, we'll do a "hottest Republicans" list. We've already picked our Top 2: Rep. Sue Myrick and County Commissioner Bill James. Hey, you gotta work with what you have.)

Campaign Slogan: "Who wouldn't want a Food Babe in office?"

This year's Lust List cover girl will simultaneously steal your heart and make you feel like an incredible underachiever. Vani Hari, 32, is a marketing consultant by day and a talented and thought-provoking blogger by night — oh, and let's not forget, she's an impactful political and nutritional activist. Not a bad combo were she ever to become POTUS (President of the United States).

Born and raised in Charlotte, Vani is the daughter of two immigrants from India. Her most indelible childhood memories are of being included in her father's impassioned political activities, such going to the polls with him at age 9 and standing in line when they were the only ones sporting Michael Dukakis campaign buttons. When she reached voting age — and after graduating from UNCC with a computer science degree — Vani got directly involved with raising money and pounding the pavement for the Democratic Party, first for John Kerry and now in fundraising and advocating for President Obama.

One of Vani's creative moneymaking endeavors was handmaking ladies' underthings that read "NO BUSH," appropriately over the you-know-what. The proceeds from Vani's wordplay panties went to Kerry's campaign. We all know how that ended, but it wasn't for lack of effort on Vani's part.

In addition to her intelligence and wit, Vani's beauty is even more comprehensive. Her Food Babe blog has attracted fans from well outside Charlotte — she's gone international, with followers from as far away as Australia. One of Vani's more famous fans is Robyn O'Brien, author of Unhealthy Truth and founder of the Allergy Kids Foundation. O'Brien, who is known as the food world's Erin Brockovich, even sent a signed copy of her book to Vani with the encouraging words, "Your work is extraordinary."

But we already knew that.

Vani's Kale and Collard shakes bring all the boys to the yard. And when asked whether her beauty or her brains give more of an advantage in day-to-day life, Vani — whose name means "Voice" in Hindi — answered candidly: "I would realistically say beauty, but I'm rarely sitting still and quiet to just be looked at. I always have something to say."

Indeed she does, and if you are interested in hearing more of it, or in learning more about her food activism, visit www.foodbabe.com. 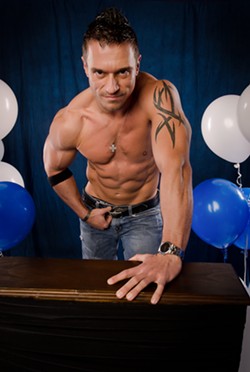 Campaign Slogan:"Vote for me, I'm more fun and more trouble than the other guy."

The only thing that rivals my love of couples awkwardly fighting in public is a good juxtaposition. For example, a Mormon who is also a gay-rights activist. Can't believe such a person exists? Me neither, until I met the proverbial unicorn, Jacob Whipple.

Jacob is a corporate trainer who was born in Utah and says he grew up "one of those repressed Mormon boys." He was still a kid when his family moved to Winston-Salem, where he lived until he relocated back to Salt Lake City to attend Brigham Young University. Upon deciding that repression no longer suited him, Jacob transferred to the University of Utah, where he graduated and became a loud voice for gay rights. He organized a protest of more than 5,000 people on the lawn of the Mormon temple in Salt Lake City after he discovered how much money the institution had flooded into the renouncement of Proposition 8 in California. Did his religious family excommunicate him for being gay? On the contrary: They divorced the church for being so ruthless in its treatment and opinions of the gay community. Yes, Momma and Daddy Whipple rock!

Jacob traveled to 17 countries before landing back in North Carolina, which, in addition to his other qualities — playing water polo, earning three degrees, speaking fluent Spanish, and recently (very successfully) participating in a hot body contest at Marigny — makes him a pretty well-rounded guy. He said his first order of business if elected POTUS would be to have a party in the White House complete with "great music and hot friends."

To that, I say ¡Que se joda! (thanks for the Spanish lesson, JW) — and God bless America!