A run-in with Van Morrison

Did a glance backstage contribute to one of the shortest concerts ever? 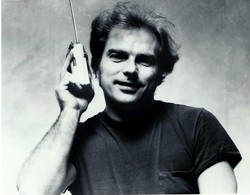 Van Morrison is often compared to the most legendary singers, songwriters and band leaders music has ever produced. Many people, however, have also compared him to one of literature's most legendarily angry characters. I'm talking about that terrible one-eyed troll, who lives under the bridge and won't let anybody pass unless they can answer an impossible riddle. That's Van in a good mood. And I've seen him at his worst. The night he played the shortest live set in musical history, except for that guy in Stone The Crows who plugged in onstage and immediately blew himself up. What makes all of this so much worse? I think I may have caused Van's temper tantrum and the show's abrupt end. If so, fellow concert-goers, I can't tell you how sorry I am.

It was fall, 1978, and I was excited to see Mr. Morrison — before the whole performance began and ended as quickly as a teenager having sex for the first time. See, I had a friend back then, Tom, who worked at the Palladium Theater where Van was singing. Tom promised me a backstage tour before the show. I was stoked. Plus, the band Rockpile was opening. As Variety might say, it all promised to be Boffo. Which, strangely enough, I also thought meant a teenager having sex for the first time.

Tom met me at the side door, an hour before the show began. I'd never been backstage at such a venue before (unless you count The Elmsford Dinner Theater where I saw The Fantasticks).

Surprisingly, it was nothing special. Mostly dank and dirty, with lots of fat, belching Teamsters milling around. At least, I hoped they were Teamsters. If they were Van's band, I thought, they needed to shave and spend the summer at one of those weight-loss camps. But there were the sounds of tooting horns and guitar licks, so the place did bear some resemblance to a rock 'n' roll hangout.

In any case, I was young, impressionable and polite. You have to be polite to Teamsters. Otherwise, they're allowed to beat you up. In fact, they had just added that to their new union contract.

As I walked around, past guys with ladders and clipboards, I turned left as Tom turned right. I saw a couple of rooms. One had its door closed; the other was open. And astonishingly, standing there in a robe, stood 5-foot-2 and 160 pounds of Napoleonic nastiness known as Van Morrison. I gasped.

Gathering myself, I let loose with the literary brilliance that is my hallmark. "Hi," I said. This bit of Evelyn Waughlike wit drew an immediate response from Van. He glared, stood there for a moment, then came over and slammed the dressing room door. So hard, I think he loosened one of my fillings. Sure, it was upsetting. But I couldn't help but feel that it was also a badomen.

Tom eventually found me. I told him what had happened. I heard him gulp. No louder than a Glock being fired. And we got the hell out of there. Within 15 minutes, I was sitting in my seat. Full of anticipation. Big mistake.

The evening began well. Rockpile, lit up the hall with luminous rock 'n' roll lightning. They played hard and did covers of Chuck and Elvis, plus groovy Nick Lowe tunes and a great song by Graham Parker. All was well. But sitting there in the 10th row, I couldn't help but feel I'd cursed the evening. Simply by glimpsing Van Morrison before he came out to play. It had that fatal foreboding that comes when the groom sees the bride right before the wedding and I couldn't shake it. All through the time the roadies were setting the stage for Van and band.

At around 10, musicians marched out and lit into "Tupelo Honey." Van, however, didn't appear until they'd played the intro about 11 times. During which, the crowd went from yelling joyfully, to that sort of horrible hiss that happens when the villain appears onscreen. To make matters worse, when he finally came out, Morrison was still sporting that disgusting purple jumpsuit he wore in The Last Waltz. I was sure the outfit would result in more projectile vomiting than during a screening of The Exorcist.

Still, the brilliant little bulldog was finally onstage. Maybe I hadn't cursed the show. Then again, maybe I had.

I noticed, immediately, that every time that malevolent little rhesus monkey finished a verse and a band member started to solo, Morrison walked offstage. He must've done it done four times during "Honey." Ever the eternal optimist (kidding), I believed it was a jazzman's move. You know, when a cat is soloing, you walk off in respect. Of course, I also use to believe that during sleep, your astral body could travel to Beijing and be back by morning. So you can't go by me.

I think the second number was "Moondance." But that moody little Lilliputian repeated his pattern of walking away every time someone soloed. The crowd began to murmur. I felt everybody looking at me. Thinking, 'That's the creep who walked in on Van and put the whammy on him.'

Then that petulant little pygmy really lost his shit.

I've since blocked out what the third number was. But Van did his Rain Man/OCD thing of disappearing every three minutes. Except this time? He stayed offstage for two minutes. Then five. Then eight. And soon, even the most mentally-challenged of us realized that Mr. Morrison would not be returning. After 15 freakin' minutes of music!

The anger, upset, and vengefulness in the room, was probably only rivaled once. In 1865. When Lincoln was shot during a performance of Our American Cousin.

We all waited for a while, thinking that the spiteful little homunculus might come back. No such luck. Food was hurled along with lit cigarettes, warm beer and curse words. Also, combinations of curse words I'd never heard before ("Unwashed pussy face" was one, I believe). Pretty soon everyone knew the show was over.

The most astonishing thing? Not a word about refunds was mentioned as the lights came on and we filed out. A couple of spiky-haired punks, clearly there to see Rockpile, tried their best to knock over the box office kiosk out front. But most of them probably ended the night getting hernias and wearing trusses.

Me? I just slunk away. After all, I'd seen Van earlier that night and freaked him out. Maybe this was all my fault. Perhaps he was about to give the show of his life and my philistine-like vibes ruined the whole thing. Or, maybe he's just a selfish, sawed-off little screwball. Either way, I said nothing. I didn't want to have any of the crowd point at me and yell, 'It's all his fault!' And suddenly start chasing me across 14th Street with torches and pitchforks.

I stood there sadly for a moment, then quietly walked off keeping my mouth shut. I kind of knew I hadn't really done anything wrong. This clearly wasn't my fault, but I split anyway. There was no use in taking any chances. All the while thinking what I've probably thought 1000 times: 'Hell, even without this incident? My life is hard enough as it is.'