A Spoonful of Spirits

Raise your glass and drink to, or better yet, for your health 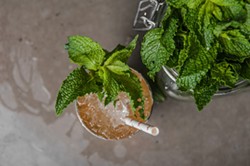 Before alcohol's sole purpose was to instill us with the courage to dance and say things we'd regret come morning, its role was fueled less by indulgence and more by necessity.

Back in the day, man turned to booze and botanicals to thwart every illness under the sun. It was ingested as a pain reliever for ailments like headaches, stomachaches and sore throats, and used topically to clean wounds and soothe muscles. In moderation, its long-lasting benefits were, and still are, longevity; reducing the risk of heart attack; Alzheimer's and more. Let us reiterate here that moderation is key.

From Hippocrates, who was called the father of modern medicine and who used an early form of vermouth to treat intestinal worms, to Dutch settlers in the West Indies who turned to the juniper in gin to rid themselves of tropical diseases, the widespread use of medicinal alcohol forms an intricate part of history.

A new trend in the cocktail revival sweeping cities is its spotlight on medicinal mixology, with barkeeps paying homage to the past by serving drinks that long-gone apothecarists used as cures. Ask any bar chef out there and you're bound to hear a number of woes, beyond heartache, that can be fixed with the right cocktail. A sip of these boozy cures may be just what the doctor ordered. Or, after a few more, you might just forget you felt any pains at all.

Holistic medicine urges allergy sufferers to take a teaspoon of local honey during allergy season, suggesting it works as a natural vaccine to build up one's immunity to nearby allergens. If you can get behind this alternative (and tasty) prescription, try mixing honey with bourbon. Bourbon, especially when heated, has a reputation for combating congestion (Trust us, even WebMD says so). Soul's bourbon honey julep incorporates Cloister's, a local brand. 1500 Central Ave. 704-348-1848. www.soulgastrolounge.com

Kombucha, an ancient Chinese elixir dubbed the champagne of life, is filled with vitamins and probiotics known to detoxify and aid in digestion. Lenny Boy's wild ale, essentially a higher ABV kombucha at 4.4 percent, has "more probiotics and more B vitamins than a traditional kombucha," says Townes Mozer, Lenny Boy's owner/brewer. Holy Moly wild ale is made with North Carolina sweet potatoes and spices, which Mozer also adds "can help to promote circulation." 2224 Hawkins St. www.discoverlennyboy.com.

Fernet-Branca is a digestif. "It's made with so many herbs. ... It's super basic so it immediately settles your stomach," says Bob Peters, head mixologist at Pisces. "After a big meal, when you've eaten too much, you take a shot of Fernet and," he snaps his fingers, "the pain is gone."

At one time, the super aromatic liquid was marketed as a cure for menstrual cramps, fevers and headaches. Its powers were so well regarded that Fernet was one of the few spirits legally sold in pharmacies during Prohibition. 1100 Metropolitan Ave. 704-334-0009. www.piscessushibar.com.

RED WINE
Found in the Palm Restaurant's A Touch of Class

One of the least debated good-for-you spirits is wine. Even traditional doctors recommend a glass of red a day. So, who's to argue that this wine cocktail (Absolut Citron with a Pinot Noir floater) can't give you your daily dose of antioxidants? "Wine's not only good for the mind and spirit, it benefits the immune system and heart," adds Max Gilland, Palm's beverage director and Level 2 WSET (Wine & Spirits Education Trust) 6705 Phillips Place Court. 704-552-7256. www.thepalm.com.

The base of this herbal concoction consists of sage, Irish whiskey and green Chartreuse, a liqueur made with 130 herbs, plants and flowers that dates back to Carthusian monks in France during the early 1700s. "In the old days, Chartreuse was used as medicine and known as an alchemical recipe for an elixir of long life," says e2's general manager Miki Nikolic. "Sage is used as an appetite stimulant and as a digestive aid. It also helps abdominal cramps and bloating." 135 Levine Avenue of the Arts, Suite 100. 704-414-4787. www.e2emerils.com.