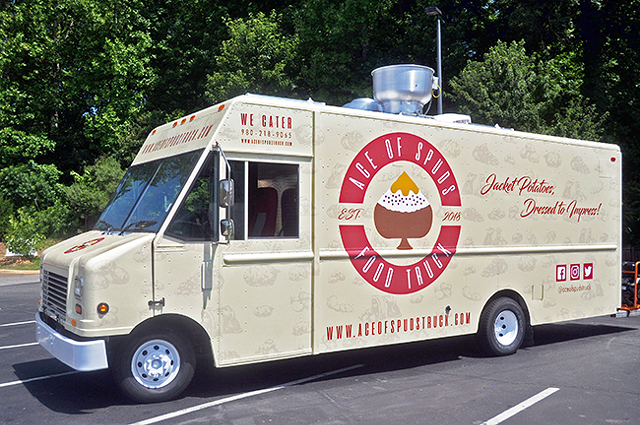 It's been a long time since chef Swerlin Goodwin had the idea to open a restaurant showcasing the culinary possibilities of the potato. It's been four years in fact, but this week customers can finally enjoy Goodwin's creations wherever he happens to park his truck. The Ace of Spuds food truck will make its much-anticipated public debut at Camp North End on Monday, July 9.

While Goodwin is the mastermind behind the food itself, it was Charlotte photographer and Queen Agenda founder Saloan Goodwin and her long-term boyfriend Rel Dunlap, a local musician and fellow entrepreneur, that helped cultivate Ace of Spuds from an idea to a food truck.

Saloan, who designed the logo and works on branding and marketing with Dunlap, isn't a chef, but she has grown up surrounded by food, she says.

As a kid, Saloan could be found taking a nap in the freezer of her dad's Charlotte catering restaurant Classic Cuisine. When she was old enough to help out, she did.

"I am from a family of food," she says. "My mom just told me a story. She was like 'God bless your soul, because when we gave you a uniform to go cater you were just out there, just started moving.'"

Growing up in restaurants instilled a certain workaholic's ethic in her, she says, one that her boyfriend shares. The two met through social media, but found out that Dunlap's mother had worked in the same restaurant as the Goodwin family when they were just little kids.

"Basically we were supposed to be hooked up as kids," he says, "but it never happened."

It wasn't until later the two finally got to know each other. They started forming their relationship just before the concept for Ace of Spuds was coming together. Now, the couple has been together for five years and they work together as the marketing team and face of Ace of Spuds.

"We were still learning ourselves together," Saloan says. "Now of course he's a part of the business." 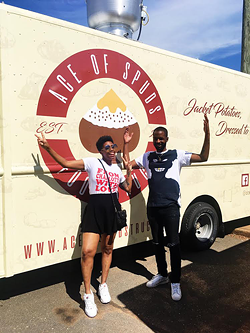 In fact, it was Dunlap who originally had the idea for a truck in 2014 when Swerlin was thinking about opening a restaurant. Swerlin didn't immediately take to the idea because he was set on opening a more traditional brick-and-mortar restaurant. There was no real precedent for a successful food truck model in Charlotte at the time.

"It took a long time to convince him to start a food truck," Saloan says. "Especially in 2014 at that time, cause it was kinda new."

After a year of slowly convincing him, Saloan's dad agreed. The family moved forward with the idea in 2015, and after researching how to operate and manage a mobile business, the team quickly found an actual truck. While fitting a food truck can often be a lengthy process, the Ace of Spuds truck only took four months to renovate.

"Everything kind of fell in our laps, to me signifying that this is probably what we're supposed to be doing," Saloan says.

While Swerlin was hesitant to the original idea of a food truck, he was always confident in his food. The truck will serve "the best jacket potatoes in town," according to its website. Swerlin realized he could turn this inexpensive starchy vegetable into a base for delicious and unique food.

"I think he just came up with the concept because it was different," Saloan says, "which works well with the fact that we turned it into a food truck, because, you know, you want your food truck to have a niche." 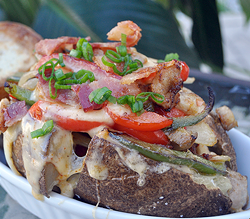 The newly set Ace of Spuds menu includes a cajun shrimp potato with chipotle gouda cheese and green onions, and a cheese steak potato with grilled peppers, onions and jalapeños. Chef Goodwin will also serve fries with a variety of toppings, and diners can expect daily specials.

The truck is also vegan friendly. Saloan says the vegan potato is a lighter option and a new chickpea potato brings a meatier taste for the vegan/vegetarian potato enthusiasts.

"I really love the chickpea," Dunlap says smiling, "I'm not vegan at all, and it was amazing."

Since Swerlin's days of skepticism, the food truck scene has blown up in Charlotte, and the city seems jam-packed with trucks offering every type of cuisine imaginable. Regardless, Saloan remains confident that her family's truck will succeed.

"It's nothing to be nervous about because nobody sells what we sell," she says.

Besides, even if there was competition for the product the Goodwin family is pushing, Saloan says there are plenty of advantages to having a food truck versus a restaurant. 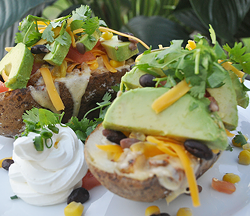 One perk is that a food truck owner can hop in the car and make money whenever they want. Like a fisherman, if the customers aren't biting in one spot, there's always the opportunity to move elsewhere for the afternoon.

Saloan remembers being with one friend and food truck owner who received a bill that she wasn't able to pay at the time.

"She didn't know how she was going to do it," Saloan says, "So we went and worked on the food truck to make the money for the bill."

Aside from profitability, the Goodwins are looking forward to bringing their food directly to the front door of their customers instead of having people from all over Charlotte worry about coming to them. Saloan says that she plans to create a pin showing the location of the truck on social media so customers can find them at a location most convenient.

They are expecting a lot of customers, and Saloan's skills behind the lens don't hurt. Her recent pictures of the cajun shrimp potato and other specialties have had mouths watering among her thousands of social media followers.

"The internet is going crazy right now," Saloan says a week before opening, as the anticipation for the truck builds. She says that people are constantly approaching her and asking when they can finally get to try Ace of Spuds.

When the day does come, diners can expect to see Saloan's dad in the kitchen, with her mother Sandra at the window. Sandra Goodwin, Saloan explains, is the "backbone of everything" and has been essential to the truck becoming a reality. Saloan and her boyfriend might be too busy with their multiple other endeavors to be at the truck all the time, but customers can expect them to continue working behind the scenes developing the Ace of Spuds brand.

They can also expect a delicious and creative meal — using one of the simplest pantry ingredients — that will blow your mind. Saloan is sure that Charlotte diners will love what her dad is serving.