All Aboard the Hydrogen Train

Stan Thompson has a better idea 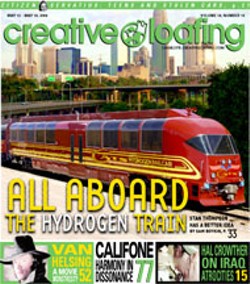 Stan Thompson is passionate about air quality and new technologies, and he's particularly passionate about bringing hydrogen-powered commuter rail to this area. Better yet, the retired strategic planner from BellSouth has been doing something about it, networking with everyone from engineers to government officials to speed up the day when his vision becomes a reality.

With the EPA recently naming Mecklenburg and seven surrounding counties in violation of the new ozone standard for air quality, a need for cleaner, renewable energy has never been greater. Thompson and his allies say that although hydrogen-powered commuter rail is at least a few years down the road, it could be a big source of relief for the region's smog.

Americans are no strangers to technology-based visions. After all, we've all long been promised a helicopter in every driveway and a robot maid in every closet. But experts say Thompson's idea is one futuristic innovation that appears as if it will actually happen: hydrogen-powered commuter trains. This may not sound as sexy as an automated maid or personal flying vehicles, but the implications are profound and far-reaching. For decades there has been talk of hydrogen -- a tasteless, odorless, colorless chemical compound that is one of the basic building blocks of water -- replacing both gas and oil as fuel. There have been some strides made over the years with hydrogen-powered vehicles of one kind or another, but only recently have we neared the point where hydrogen technology can be realistically applied to large-scale commercial transit.

Thompson's vision is that such a project -- the first of its kind in the world -- could get its start along the 28-mile North Corridor commuter rail system linking Charlotte to Mooresville. There's still research and development to be done, and other hurdles to overcome, but a group of activists is trying to get all the pieces to fall into place. If they succeed, "hydrail," as local supporters have dubbed it, could dramatically impact the entire Charlotte region in terms of transportation, the environment, tourism, economic development, and perhaps even the state's place in history.

Stan Thompson has been a longtime activist for improving Charlotte's air quality, having worked with the EPA since the early 90s on reducing congestion as a way to abate pollution. When he retired to Mooresville in 1996, he joined the Charlotte Chamber's Transportation Committee, as well as Voices and Choices -- a regional non-profit organization that promotes economic and environmental sustainability -- to continue trying to solve our air quality problems. But Thompson stresses that the issue of clean air isn't just a matter of legislation, sanctions or administrative law.

"It's a matter of life and death," Thompson says. "Both my parents died in Charlotte of lung disease. I very nearly died here of asthma when I was in third grade. I've long been concerned about Charlotte's collision course with non-attainment. Before I moved to Mooresville, Charlotte was my home. My friends are here. Air quality is a personal thing."

It was with this impassioned mindset that Thompson first brought up the idea of hydrail during a 2000 Charlotte Chamber meeting. Although the idea was dismissed as not being technologically viable, Thompson began researching and networking in earnest, talking with scientists, environmentalists, light rail experts and policy makers across the country.

Thompson also got together with friend and longtime Mooresville resident Jim Bowman, a retired aeronautical engineer who once worked on NASA's Lunar Lander program. Bowman also believed in the idea, and his in-depth, hands-on engineering experience complemented Thompson's theoretical approach. Together, the two men came up with the term "hydrail," and began spreading the word about their evolving idea.

"When I first met Stan, I was looking for a way for the people and different agencies of this region to bring their resources together and help improve the quality of life," Thunberg says. "When Stan started talking about hydrail, I immediately latched on. This project has so much potential, and the synergies are obvious. I believe the impact in this region could be a lot stronger than the biotech industry, which is being touted at the state level."

Specifically, Thunberg sees the project creating in the area a "Hydrogen Valley USA," and points out that there is renewable hydroelectric power available from a number of sources along or near the North Corridor rail line, including Cowan's Ford Dam and McGuire Nuclear Station. "It's an entirely new industry," Thunberg says. "There's all kinds of economic development opportunities in terms of new businesses, jobs and tourism. It would be completely unique."

"I think it's a great idea," says Mooresville Town Manager Rick McLean. "It's certainly worth pursuing. Thompson and some of the folks he's working with are well qualified and seem to think that while it's a longterm project, it is feasible. The town of Mooresville certainly supports it. We'd love to see a hydrogen-powered commuter train come to Mooresville."