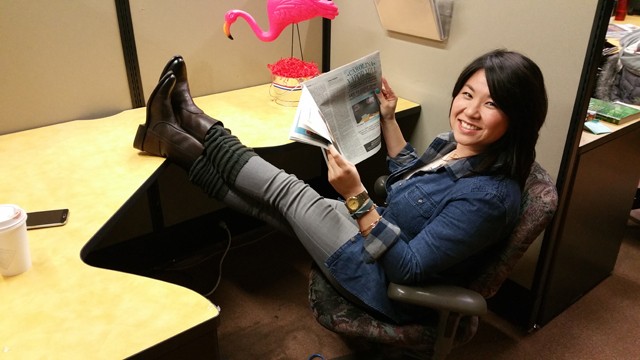 Amy Chiou kicks back in one of our cubicles.

For 2015, Amy Chiou, 31, isn't cutting herself off from unhealthy eating and occasional laziness. Instead, she, who supported both Hillary Clinton's and Anthony's Foxx's runs, has vowed not to work on any campaigns. For this political junkie (she live-tweeted the mayor's State of the City address — you knew that was a thing, right?), that'll be hard. But she's got a worthy project to keep her from back-sliding.

A political consultant who's been in Charlotte for six years, Chiou spends a lot of time analyzing the spaces where young professionals, millennials and politics intersect. Currently, Chiou works with WTFwevote.org (FYI: "WTF" stands for "We're the Future"), an organization described as "a non-partisan approach to civic and political engagement, starting with voting, that brings together new ideas, new leaders and a new generation seeking to create lasting impact." This starts with a mission to "develop an engaged community and cultivate leaders for Charlotte-Mecklenburg."

But in July, she plans to launch a new app of her own, called WeVote. It's a creative solution to increasing voter turnout. By intentionally launching in a midterm election year, the move will draw attention to local races.

Chiou compares the app to OkCupid, a dating site that matches singles based on questions they've answered similarly. Each political candidate will be encouraged to create a profile designed to help users understand the issues and each candidate's views. Users can also compare candidates side by side and see their answers to survey-style questions.

"It's just like a dating profile, which some are terrible and some of them are great," says Chiou, who signed up for OkCupid, Tinder and networking sites like Skout in order to do research for WeVote. Through friends' subscriptions, she also accessed Match and eHarmony and came away with more insight than she'd anticipated.

Chiou says she found that many people had no idea what they wanted. "I expected that online dating would be somehow different than actual in-person dating, but I was fascinated by how some people were still not very good at presenting themselves in a positive way."

Chiou doesn't seem to have a problem with that in her own life though. She discovered the art of networking in the first grade, when she was appointed the "Ambassador for New Kids" at her elementary school. "So, if you were a new kid, you got to hang out with me," she says with a laugh. She was tasked with introducing herself to new students and showing them around the school.

"Basically, it was a nice way of making sure that if you were a new kid, you're not completely alone," she says. "You get to know the most scrupulous kid, who will talk to anyone." She is still friends with some of the people she met through that duty.

On social media, Chiou includes in her bio that she's an "awkward dancer" (though she did spend more than 10 years taking lessons in ballet and hip-hop style dance) and is a frequent hashtagger, commanding the use of #cltcc, #weloveCLT and #alwayshungry, among others.