A visit to Haberdish, a new modern Southern eatery in an old renovated building on North Davidson Street, might make you rethink NoDa's history.

The restaurant's name (a play on haberdasher/haberdashery, an old-fashioned word for a person or place that sells small articles of clothing; dish replaces dash...get it?) goes back to mill town times. NoDa, being one of Charlotte's most historic mill neighborhoods (home to The Lofts at NoDa Mills and Highland Mill Lofts, both old mills-turned-trendy-living-quarters) was once hustling and bustling to the beat of workers who dealt more with busy factory work and less with leisurely dining.

Owner Jeff Tonidandel wanted his latest eatery — he also owns Crepe Cellar and Growler's Pourhouse, both in NoDa, and is co-owner of Sea Level and FlatIron — to touch on the 'hood's mill history, as well as Charlotte's culinary past.

In regards to a third food establishment in NoDa, Tonidandel says the reasoning is two-fold.

"I just love the neighborhood and we've been a good fit. Also, from a management perspective it's really great having everything in the same area. It's all walkable and just seconds away."

The location, a general store in its heyday, was used for storage over the last 20 years. You'll most likely remember the boarded-up exterior as a former concert poster hodgepodge. Once gritty and decrepit, the interior has been renovated with a modern feel that's nestled with vintage charm — selvedge denim taken from a Winston Salem mill graces the backs of booths and a 1950s-style soda fountain is the centerpiece of the bar. Architects and builders were careful to save the brick facade and wall of the building, creating a shell before replacing the roof, as well as support beams, and frontal windows. Research for the restaurant's concept, food and design elements has strengthened Tonidandel's knowledge of the area. Though he's originally from Cleveland, Ohio, he's called Charlotte home for more than 20 years.

"I think the exploration of food, for me, is really kind of how I learn about places. That's how I travel, too. I like getting local food while traveling and exploring," says Tonidandel. "It's a big part of having that sense of place and culture and what people are doing, so yeah, it's a big part for me and it's been great to dive into the place where I live and am setting down my roots."

These old-meets-new concepts seem to be flourishing. For example, The Pumphouse — a former pump house turned riverside eatery — opened earlier this year in Rock Hill.

At Haberdish, pickled jars sit up on shelves and canisters with candles are the centerpiece of tables. The atmosphere was bustling during a Thursday night visit. Upon entry there was an hour wait, but when seats popped up at a high-rise communal table, my husband and I jumped for them. 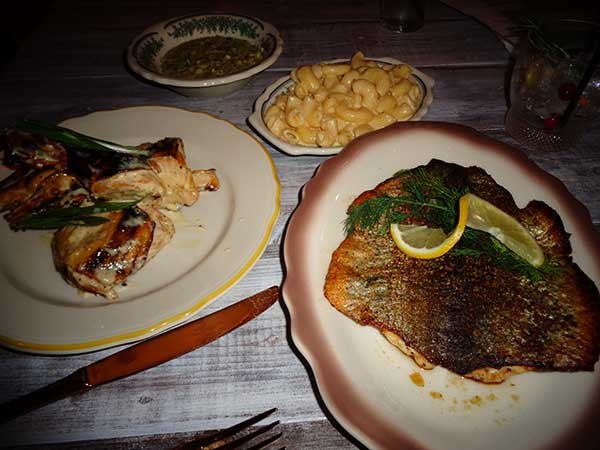 The menu is a la carte with main entree selections — fried or brined chicken, cast iron NC trout, cauliflower steak and pork shank — and lots of snacks and sides. We opted for the satisfying hush puppies with sweet tea butter, mac and cheese, and kale grits (slow-cooked Anson Mills grits with creamed kale), but were tempted by the livermush toast. Having a grandmother who countlessly begged me to try the Southern staple that I deemed disgusting by smell and description as a child, there was no giving in.

As Tonidandel and his crew explored Charlotte cuisine's history and other local and regional food, they decided livermush was a must for the menu, despite its traditional simplicity.

"Traditionally, if you were going to work or school 80 years ago, your mom would have taken a piece of livermush, thrown it on a cheap piece of white bread with mustard on it and put it in your lunch pail," he says. "We're trying to make a really awesome piece of livermush by putting it on a piece of Wonder bread and accentuating it with homemade pickles and mustard. The only difference between our livermush and others is that we're doing a whole pantry take. We looked around and thought about what would be in someone's pantry 100 years ago and we decided to get stuff from Anson Mill. We set the livermush up with Carolina Gold Rice instead of grits — traditionally it's set up with grits — but the Carolina Gold is like a short grain risotto type of rice and it works really well to set up the livermush and gives it a great texture."

In addition to Carolina cuisine, there are more general regional touches — Piedmont, Appalachian — that creep in.

The brined chicken that I ordered there was lathered in an Alabama white sauce (a mix of horse radish, garlic and mayo) that went well with the chicken's smoky, moist and tender consistency. All of the restaurant's chickens are vegetarian-fed, anti-biotic free and hormone-free and come from Springer Mountain Farms in Mt. Airy, Georgia. Tonidandel says those check boxes were a must, but more importantly he was struck by the farm's humane treatment of chickens as he researched during his quest to make the best fried chicken.

In addition to the regular menu, the restaurant will also offer chicken and waffles on Sundays and chicken and biscuits on Tuesday. While the restaurant is currently only open for dinner, Tonidandel has plans for it to eventually be open for lunch. There will also be a patio area along the side of the restaurant by the garage doors that can be lifted in warmer spring/summer months.

To go along with the historical mill theme, mixologist Colleen Hughes (who picked up a win in this year's Best Of Charlotte) has concocted a growing list of cocktails. So far, Tonidandel says that the punches have been a hit in addition to bourbons with ice.

Many of the drinks are seasonally inspired, like the Holiday Punch, which is garnished in holly and red berries. They also have plans to roll out punch bowls, which can be ordered for tables. Prohibition times? Count us in.