Charlotte Metro Zoo has been cited over a dozen times by the USDA. Critics wonder why it's still open. 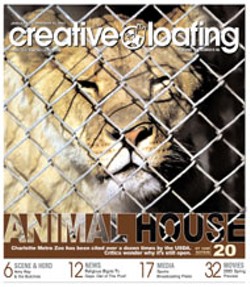 And that, critics say, is a big part of the problem.

"Yes, non-compliant citations are not unusual," says Amy Rhodes, a spokesperson for PETA. "In fact, it's a disgrace that the USDA allows exhibitors to repeatedly fall short of their minimal standards while they typically do nothing other than give the exhibitor time to correct the problem, regardless of how serious it may be.

"Inspection reports on Charlotte Metro Zoo show chronic, serious problems that should not have gone unaddressed this long," Rhodes continues. "Sadly, there are countless facilities across the country that have equally troubling citations, but the numerous and repeated citations Charlotte Metro Zoo have amassed are particularly disturbing."

If an inspection reveals deficiencies in meeting the AWA standards and regulations, the inspector instructs the facility to correct the problems within a given timeframe. If the deficiencies have remained uncorrected by the time of the follow-up inspection, APHIS considers possible legal action. Some cases are resolved with Official Notices of Warning or agency stipulation letters, which set civil penalties for the infractions. Civil penalties include cease-and-desist orders, fines, and license suspensions or revocations. If APHIS officials determine that an alleged AWA violation warrants more action, APHIS submits all evidence to the USDA for further legal review.

"The case may be settled out of court, which means no violation, but they agree to take whatever action both sides agreed to," says the USDA's Rogers. "Or the case can go before an administrative law judge. If they're found guilty, then they are charged with a violation."

The USDA currently has 99 inspectors nationwide. They are controlled from two offices, one in Raleigh, and one in Fort Collins, CO. Rogers explains, "The inspectors are more or less like traveling salesmen. They have a region within which they operate. They pretty much know what's going on within their region. If you've never had a problem in the 10 years you've been licensed, they're going to know they don't need to be out there every other week. But at the same time, if they notice things are not being fixed, they'll keep on it."

The number of repeat offenses that show up time and time again in the Charlotte Metro Zoo's inspection reports suggest there's a glitch in the system. In addition to the USDA's federal regulations, there are also local and state officials charged with enforcing animal cruelty laws.

Does the USDA supercede these agencies? "Not necessarily," Rogers explains. "The Animal Welfare Act sets the minimum federal standards. If the county requires higher standards, you have to follow those. If the county standards are lower, you have to meet ours. So a county or state can do their own thing, but they still have to follow federal regulations. Say, in a purely hypothetical sense, you have a tiger and you're beating it with an ax handle. That would obviously violate our regulations. However, it would also violate local and state animal cruelty statutes. Local authorities could press animal cruelty charges even though the USDA is pressing charges for violations against the Animal Welfare Act."

We contacted Clay Martin, supervisor of the Rowan County Animal Shelter, the county in which Charlotte Metro Zoo is located. Martin said his organization doesn't oversee Charlotte Metro Zoo, and that the USDA is responsible for inspections and writing violations. Asked if he thought the numerous USDA citations written to Charlotte Metro Zoo warranted any action from his department, Martin responded, "I didn't know the USDA had issued them any. That's news to me."

Critics say that a lack of communication and the inspection process in general -- one that is convoluted and mired in red tape -- makes it difficult for any real corrective action to be taken.

"The local animal protection authority is charged with enforcing local and state cruelty to animals laws," says Rhodes of PETA. "However, oftentimes local and state agencies defer to the USDA and choose not to investigate possible violations of local and/or state law. This is unfortunate for the animals because the USDA prosecutes only a handful of the more than 10,000 facilities it licenses each year. Egregious violations, like those Charlotte Metro Zoo has been cited for, go virtually unchecked. Meanwhile, the animals continue to suffer at the hands of greedy individuals who breed, sell and exhibit animals for no other reason than profit."

As one might anticipate, Macaluso isn't exactly a big fan of PETA. He claims that, among other things, they're guilty of funding terrorism, and they're currently running a program trying to get milk taken out of all the public schools and replaced with beer.

"PETA is a bunch of idiots that no one cares about anymore," he says. "Their credibility is down to nothing."