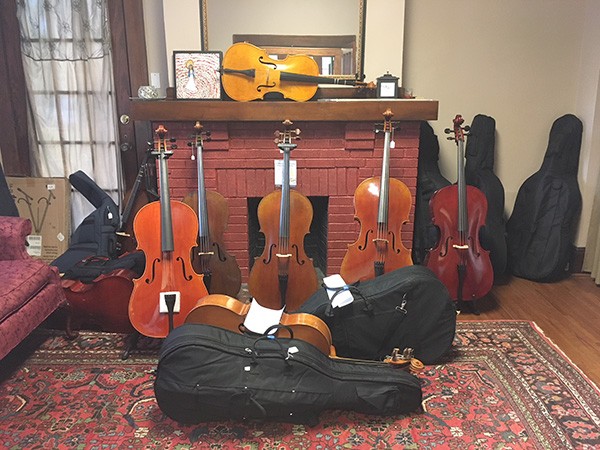 Look at all those strings! The Violin Shoppe is a cozy little store in Elizabeth.

Glen Alexander remembers the night Kyle Petty came out to play. It was three years ago, and Alexander, an award-winning fiddler, music teacher, and leader of the swing combo Little Big String Band, was hosting a gallery crawl at the Violin Shoppe, the cozy music store he co-owns and operates in Elizabeth.

"I was teaching Kyle at the time and we invited him to come by," Alexander says. "He showed up, grabbed one of our guitars and started to play some of the songs he wrote."

Patrons were flabbergasted, scarcely able to believe they were seeing the acclaimed former racecar driver in the guise of a songwriter and guitar player.

"It was a hoot," Alexander says, laughing.

Less than a mile across town, at Midwood Guitar Studio, manager Dan Hood is also enthused about in-store performances. In contrast to Petty's impromptu playing at the Violin Shoppe, Hood is touting scheduled shows at the Plaza Midwood boutique that stocks high-end and custom-made guitars, basses and amplifiers.

Upcoming gigs at Midwood include bluegrass flatpicking virtuoso Alan Shad on December 6 and a yet-to-be-determined lineup for the December 7 edition of Songs on Central, the quarterly songwriter-in-the-round event Hood launched in January. Making music is the main focus for many in the music-store trade, Hood says.

"The more we can support that," he says, "the better."

In Elizabeth, David McGuirt, Alexander's business partner at the Violin Shoppe, as well as Little Big String Band's guitarist, echoes that sentiment. "We're musicians first and businesspeople second," he says, adding that he and Alexander are stoked about their band's November 19 show at the Evening Muse, which celebrates the release of Little Big String Band's self-titled debut album. 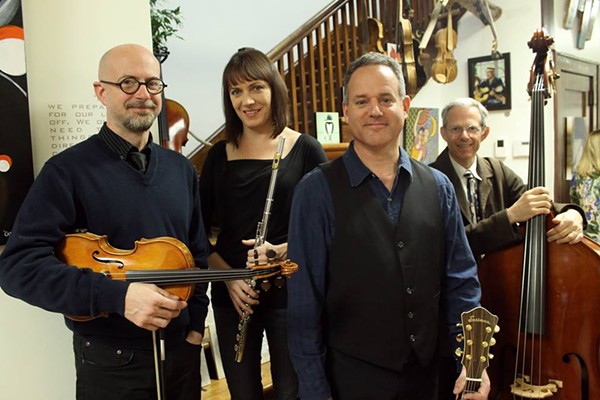 The Violin Shoppe and Midwood Guitar Studio are two of a quartet of Charlotte-area music stores that see turning a profit and supporting the local music scene as compatible goals. The other two grassroots, musician-friendly shops are Woody's Music in Rock Hill, South Carolina, and Mullis Music, in Concord. All four are reactions against the depersonalizing trend prevalent in much of the American retail landscape.

These local shops take their cue from similar stores in other parts of the country, such as the legendary McCabe's Guitar Shop in Santa Monica, California, where you can not only buy great instruments but also learn to play them and even catch in-store performances by artists ranging from Sean Watkins of Nickel Creek to veteran singer-songwriter Kinky Friedman; or the Folk Music Center in Claremont, California, founded by the grandfather of singer-songwriter Ben Harper, who grew up working in the shop; or the nearer-by female-owned Fanny's House of Music in Nashville.

Midwood Guitar Studio celebrated its one-year anniversary on November 19, says Hood, who is 40. When owner Douglas Armstrong opened the boutique's doors, the Charlotte music-store business was dominated by the big-box emporiums Sam Ash and Guitar Center, well-stocked establishments devoid of the personal touch.

"In this industry, the way of the knowledgeable salesperson has largely been lost," Hood says. "We're trying to bring back that feel and mentality to this store." 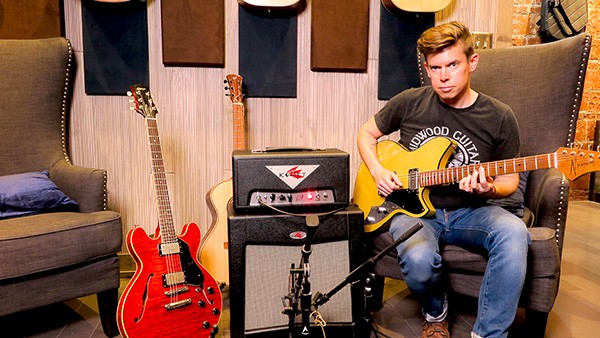 Everyone on Hood's staff has played or is currently playing professionally, he adds. That gives employees experiential insight into musicians' needs.

"Besides," Hood says with a chuckle, "where else are you going to be able to play this many cool guitars in one place?"

Across town, the 46-year-old Alexander says he and co-owner McGuirt went for a homey feel when they bought the Violin Shoppe nine years ago. His assertion is borne out by the comfortable lesson room in which he is seated, and by the incongruent, old-fashioned popcorn machine nestled amongst the violins, cellos and string basses. These aren't things you normally find in a sterile strings shop selling to classical musicians.

"There's a certain hoity-toity feel that a lot of violin shops have," Alexander says. "Our approach is different. We realize that when families come in, it's all they can do to come up with the $1,000 or $2,000 [needed] to purchase their first decent instrument. So we make them feel at home."

Hence, the popcorn, coupled with a leisurely, no-pressure sales approach, which allows customers to take a violin home for a trial period before making a purchase.

Both Hood and Alexander exude the modest confidence of guys who know their business inside and out. They'll share details on their expertise and careers, but you have to ask.

Hood has played guitar professionally for 15 years, and he's taught guitar, bass and mandolin for 12. He's released solo EPs as well as an album with Charlotte rock band The Noises Ten in the mid 1990s.

In addition to corporate gigs and stints as a music director at area churches including Threshold in Matthews, Hood won a regional Emmy in 2012 for music he co-wrote for the documentary From the Heart. He's also netted numerous American Advertising Awards awards for composition. Three years ago, Hood started playing with his current main gig, the Charleston, South Carolina, Americana band Blue Dogs, which headlined at the Visulite earlier this month.

Alexander, whose mandolin-playing father Archie played with the Muddy Creek Bluegrass Band and the Alexander Family Gospel Group, picked up his first fiddle at 11. After graduating high school he started fiddling for country-rock band the Carter Brothers, now based in Nashville. By 19, Alexander was already teaching fiddle at Central Piedmont Community College. A four-time and current champion at the Old Fiddlers' Convention in Galax, Virginia, Alexander was honored by the North Carolina Bluegrass Music Association last October for his achievement in preserving and teaching traditional music. His next teaching gig will be for fiddle legend Mark O'Connor's summer string camp at Myers Park Baptist Church.

Alexander still gives private lessons in the room where he's seated, but he's had to scale back due to the success of the Little Big String Band. Launched nine years ago as a folk duo comprised of him and McGuirt, the combo has expanded to include bassist Scot Caviness and classically trained Winston-Salem Symphony substitute flautist Sharon Fogarty.

The unusual combination of flute and fiddle steered the band's sound away from folk to swing, a direction that's proved popular at the band's monthly gig at the Pizza Peel in Cotswold, plus one-off shows like their set at WTVI's Downton Abbey premiere party in December 2015. McGuirt is confident their brand of swing will go over well at the upcoming Evening Muse show.

"You watch people listening, and their head is moving and their foot is tapping," McGuirt says. " I think people dig [swing] because it's feel-good music."

The Violin Shoppe also has gotten involved in helping the community, Alexander says, contributing instruments to organizations such as the Winterfield Youth Orchestra. "It's an inner-city [elementary school] orchestra where the students get a chance to learn, play and perform with musicians from the Charlotte Symphony," Alexander explains.

"We're also bringing our instruments to the [Northwest] School of the Arts," Alexander says, adding that musicians who cannot afford to buy violins and cellos can rent them through the school.

For his part, Hood foresees Midwood Guitar Studio launching similar community efforts with its guitars in the near future. Storeowner Armstrong is currently drawing on his construction background to help build a men's shelter in Union County.] But for now, Hood is focused on fostering a communal vibe at the store.

His goal is to turn the store into a hub for guitar players; a place to meet up, hang out before gigs at nearby venues, and exchange notes about instruments, amps and accessories.

"We want to be a good source of information for artists who want to step up from garage band to the next level," Hood says. "A lot of that depends on gear."

An example of Hood's "hub" model is Alexander's store, which in its nine years has become a hangout for strings players. Alexander wouldn't have it any other way. At the very least it makes the shop a pleasant place to be, he says. He never wanted to preside over a dusty pretentious store where people feel they have to speak in whispers.

"I can see the reactions as soon as people walk through the door," Alexander says. "They go, 'Oh, these are just normal guys.'"

Watch the Little Big String Band get down on swinging "Sweet Georgia Brown" at the Pizza Peel last year.