Behind the wallpaper with Anida Gurlit 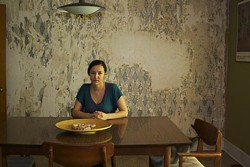 Taking a risk on an older house with a long list of needs isn't usually what people tend to do nowadays. But after Anida Gurlit, a music programmer at Muzak, stepped into the two-bedroom, 1,400-square-foot house nestled between Plaza Midwood and NoDa, she couldn't resist the diamond in the rough surrounded by towering trees.

Ten years ago, as Gurlit searched Charlotte for a new place to live, she stumbled across a vintage home with lots of potential. "They had an open house one day. The lady was the second owner and had lived here since the '60's. I walked through and completely loved it," she says.

Upon entering through the front door, the living room features a brick fireplace bordered by oversized floor-to-ceiling mirrors. "When I first moved in here, I almost took them down because they are kind of dated," Gurlit says. Deciding that the mirrors helped the room look more spacious, she painted the walls light aqua, cream and a dark bluish gray to add depth and dimension to the living area.

In the kitchen, the far left wall is covered in a painted diamond pattern with light creams, greens and grays — no doubt very old. If you look close in the center of the pattern, you can still make out part of a person's signature and date. To incorporate the mural in with the rest of the room, she painted the adjoining space an olive green and light bluish gray.

"The wall had an average, ugly flower wallpaper," Gurlit says. "As I started taking it down, I discovered that there was this really cool '50s or '60s pattern underneath it."

As she struggled with the decision to cover up the faded design or not, the longer it stayed up, the more she came to like it. "When I sell the house, I will probably have to do away with it because I don't think it is for everyone," Gurlit says.

The ranch-style home's open floor plan creates a retro vibe that ultimately convinced Gurlit to purchase the house. She says that the home was modern in its own time, and that style is also reflected in the furniture that is found throughout her rooms. In her kitchen is a traditional Danish dining set that was passed down to her. "My dad grew up with it and so did I. The table, chairs, china cabinet and hutch are all from the same era as the house and fit perfectly."

A shiny, mustard yellow platter sits on the table, adding a pinch of contemporary and stands out even among the bold pattern of the mural's background.

In addition to her venerable pieces of the past, Gurlit says she cherishes two handmade structures, built by a friend. A coffee table, that was made simply by gluing plywood together, has sharp lines, adding a touch of mod. The kitchen counter was extended and raised, allowing space for bar seating and an additional countertop. And even though they were made recently, the two creations blend in well with the overall past-meets-present finesse of the home.

If you'd like your home to be considered for our weekly Creative Living feature, e-mail 0x000Akimberly.lawson@creativeloafing.com.