Greg Mann and his rare Ann-Margret collection inspire and shine 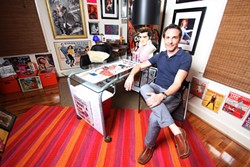 Marilyn. Audrey. Casablanca. Elvis. One-word bonanza stars mass-marketed every year in calendar kiosks and knickknack stores across the country, all trying to embody the elements of style and glamour from a bygone decade tinged in nostalgia. But what about the other shining stars? Given the pop-culture prevalence of the top icons plastered on Target "vintage" T-shirts, if aliens landed at the mall right now, they'd think the only movies made before 1985 featured Elvis fighting Nazis in Casablanca while Marilyn and Audrey posed in the background.

Which is why collections that feature stars who aren't subjected to endless over-marketing and pop kitsch are so unique. The stars are no less bright, just harder to find ­— the sand dollar among conch shells.

In a small brick building in Myers Park, a dark checked-floor stairwell leads visitors to Greg Mann's cozy two-bedroom. Mann has devoted his second-bedroom office to a star you sadly won't find in the poster rack of Spencer's Gifts. Ann-Margret, dubbed the female Elvis, with shining red locks and sex-kitten screen presence, is the headliner of Mann's life. And his collection proves it.

Much like the vivacious Ann-Margret herself, the room is filled with light and an airiness that surprises; one would not expect a room covered from floor to ceiling in framed photos and posters to feel so bright. Rather than be overwhelmed or crowded by the collection, Mann has utilized the space in such a way that the room feels larger than it actually is. A thin glass table serves as a work area, and its jaunty angle toward the center of the room opens up Mann's office area; he works on his freelance art projects facing the rest of the room rather than just a single wall. A Japanese poster of Ann-Margret momentarily covers the glass table, and a large lamp made of a bust of Elvis shines on the end of the table closest to the wall. Mann's computer sits on a tidy corner desk, and the office chair between the two make for ample workspace. It's no dank and dark basement collection; this is a room that fosters creativity and inspiration.

Ann-Margret has longed served as Mann's muse. He first saw her during a midnight movie on a small television when he was around 10 years old. The movie was 1966's Made In Paris and Mann says, "As soon as I saw her, I was blown away. She had her own fire. That's what I related to."

A lifetime scouring flea markets and autograph shops have led to walls full of 8-inch-by-10-inch clear acrylic box frames holding photo after photo of the redhead; each face and pose different. A virtual chameleon, at first glance the casual visitor may mistake each photo for a different actress.

Younger readers may not know who Ann-Margret is (and yes, it is simply Ann-Margret, hyphen included and no surname needed) or what films she has starred in. One conversation with Mann, a handsome fellow who could double as a gentleman's version of Christian Bale, and no Ann-Margret stone is left unturned. Born in Sweden, the two-time Oscar-nominated actress rose to stardom in the U.S. with films such as Bye Bye Birdie, Kitten With a Whip and Viva Las Vegas (starring lifetime friend Elvis Presley). Later in life, Ann-Margret became a favorite USO star of Vietnam vets — so much so that on March 31, she will be featured at the Patriots Point Naval and Maritime Museum in South Carolina, aboard the USS Yorktown for "An Evening Honoring Ann-Margret." (A short drive from Charlotte, for those interested in attending.)

"She's done so much for veterans and the USO," Mann says. "I wouldn't have been a fan for long if it weren't for the fact that she's a really good person."

For Mann, that goodness extends to his own personal life. Most of us never have the chance to meet our heroes, and are afraid of disappointment when we do. Mann has not only met Ann-Margret, but found her to be just as vivacious and charming in person as on screen.

Early admiration of Ann-Margret's effervescent style peaked Mann's interest in fashion, leading him to a life working in the larger fashion houses of Manhattan. A Bob Mackie original sketch of the starlet in a glowing gold, feathered and sequined gown leans against Mann's wall and stands as testament to his New York career. A few years ago, Mann left New York to pursue his inner boho artist in New Orleans. He found his way to our fair city after the devastating Katrina forced him from his Louisiana home. Losing part of his collection in the hurricane made him realize that storage was no place for his treasures. Books, albums, posters, postcards, movies, VHS TV specials, show programs, magazines, paper dolls — everything has now found a place to be displayed or safely admired.

"I wanted to do this article, in part, to encourage collectors to display their collections. It says so much about them and it's so inspiring to have them around. Enjoy it while you've got it," Mann says. "We only rent this stuff anyway."

Mann pauses for a moment, then adds, "Well, a lot of this I want buried with me!"