A look back at the year's dumbest local crimes and criminals

By Victoria West, Karen Shugart and Jared Neumark
click to flip through (2) 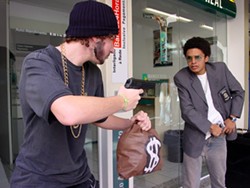 Welcome to the 2nd Annual Best of The Blotter. Most of you know what The Blotter is, but for those of you who don't, it's Creative Loafing's weekly account of the most unusual and bizarre crimes in Charlotte pulled straight from Charlotte-Mecklenburg Police reports. Basically, this stuff is so crazy that it can't be made up.

From stories of scorned lovers to brawling co-workers to violent threats to random acts of foolishness ... you'll find it all here. Yep, it's all real and happening to your neighbors -- or, in most cases, because of your neighbors.

If you believe that people in Charlotte are crazy, reading The Blotter will only give you more evidence for your case. In fact, it might have you thinking that the people in charge of the city's water supply should crumple up prozac and dump it in our drinking water.

So that guy who lives across the street who you suspect is burying bodies in his back yard ... he probably is, and you just might read about it in The Blotter next week.

I'm going to let you marinate on that.

FRESH PRINCE: A man was taking out the trash by his church when he heard a semi-automatic weapon being racked, followed by commands to stop and surrender all his money. The mugger took the keys to the man's Cadillac and told him to get in the trunk because he was being uncooperative. The man asked if that was really necessary since he had already given up his wallet and keys and the reasonable mugger obliged him, saying he could ride in the front. The mugger dropped the man off a mile from where he was abducted and told him not to walk too far. One more thing: the man asked his gun-toting kidnapper would it be too much trouble to get his wallet back. There was nothing of value to the robber anyway. Again, the thief obliged, but unfortunately he couldn't hand over the actual wallet because his fingerprints were on it. The victim told the police afterwards that his abductor bore an uncanny resemblance to the actor/rapper Will Smith.

JESUS IS HOT: Baby Jesus, the most popular nativity scene figure, was stolen from a man's front yard. According to the victim, this is the fourth time he's had a baby Jesus stolen. In an unrelated incident, the Grinch made his first appearance of the holiday season: An unknown suspect (most likely green) broke into a person's home, opened all the presents under the tree and stole some of the items within.

GRAND THEFT SEX: The sex wasn't good enough for a local woman. Her partner reported that after doing the nasty, his lady friend left and stole his car.

FINDER'S KEEPERS: A visitor at someone's home asked to use the restroom but did not really need to go. Instead he went into the victim's room and stole $9,000 out of the garbage can. Trash raiding, no matter how lucrative, is not really a crime.

MARMOT MATHEMATICS: A ferret owner let another person borrow his ferret cage, but when he asked for it back, the woman refused to return it. The victim discovered the ferret cage borrower had given the cage to a third, unrelated ferret owner. Lost in all this business are the homeless ferrets caught in between.

ALL KIDDING ASIDE: A guy put the $240 he received from a friend on a counter, when a woman picked it up. The guy thought the woman was kidding and would give it back. He was wrong.

WITH FAMILY LIKE THIS: An elderly woman reported that someone "within her family" stole her purse, which contained her wedding rings, $175 cash and various credit cards. The suspected thief eventually returned the stolen purse, but the cash and jewelry were missing. The woman eventually found her $4,000 rings -- at a pawnshop.

STOLEN GRASS: A funeral home staffer reported that 61 grass plants were dug up and stolen from the funeral home's lawn.

IN THE MOOD FOR LOVE: A man was arrested at a Johnston Road grocery store after police were told he attempted to steal a Valentine's Day card, a pack of Orbit spearmint gum, a paring knife and a $6.95 box of Lifestyles condoms.

FISHING FOR TIPS: An employee of an upscale south Charlotte seafood restaurant was arrested after receipts indicated he'd been over-charging customers for dinners and pocketing the extra cash. The employee also kept money from cash-paying customers and instead charged their tabs to other customers' credit cards.