Bla/Alt Fest Returns for a Second Year of Inclusion

The Bla/Alt Festival, founded by LeAnna Eden, was launched with the intention of flipping that script.

The festival, dubbed "an inclusion of black identity," boasts a lineup of black-fronted alternative musicians and bands from the Charlotte area to show that not all black musicians are rappers or hip-hop artists.

The punk, rock, indie and alternative music scenes are genres that are saturated with white men, so it's important to the community to showcase the black musicians who are also thriving.

Eden, who launched the festival for a successful inaugural run last year, said it's been easier to throw the festival this year because of the community support that she's received in sponsorships, donations and excitement. The free and family-friendly event on Saturday, Oct. 20, is meant to bring the community together.

Leading up to the festival, Creative Loafing caught up with all the local bands on the lineup to talk about community, music and black identity. 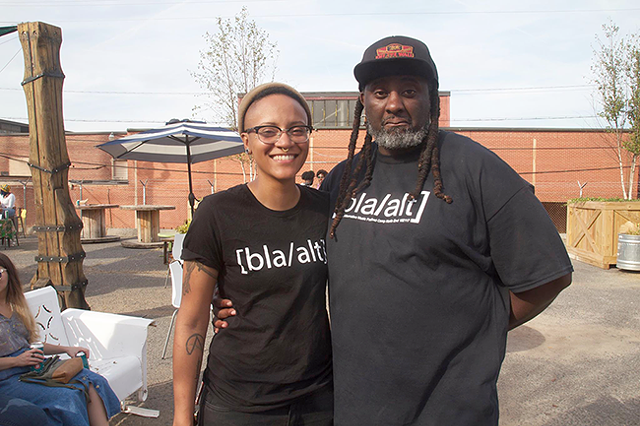 LeAnna Eden & The Garden Of

Eden moved to Charlotte a few years ago and found her spot in the black rock scene, however lacking it was. Over the years, she has evolved her band's sound and even released a self-titled EP.

Most of her inspiration comes from failed relationships and the people that she's met in her life. LeAnna Eden & The Garden Of track "Walk Away" is about doing the best thing for yourself and walking away from a relationship, no matter how hard it is. The "sequel" to that track, "There's A Lot of Love," follows up post-relationship about how you just have to keep going.

"That songs about getting out of it and trying to convince yourself," she said. "Every day you gotta get up and you gotta do what you gotta do."

Her smooth vocals lay over the quick guitar riffs and heavy drums and bass. It's easy to connect with her music, as her lyrics give listeners a finger on the pulse of emotion in the songs.

Eden has come a long way from the days of showing up to shows with only a guitar and no stage plot. She had to learn to manage her band through scouring for information. To her, it's important that bands share information to help lift one another up and she's always willing to help out with a band or artist just starting out and coming into the scene.

"If I have any kind of information, I will always give it out. And I feel like that's another thing with communities that people forget is it's about sharing," Eden said. "If you have something that can help someone else grow and to further themselves, why wouldn't you share that information?"

Alexa-Rae Ramkissoon, Kynadi Hankiins and Amber Daniel round out the lineup of the local rock band, Blame The Youth.

Their fast and upbeat rhythms match with a driving bass and Daniel's honey-like vocals. On the band's debut EP, The Hourglass, Ramkissoon's stinging guitar riffs and Daniel's deep bassline perfectly contradict and dance around each other, supported by skilled and well-timed drumming from Hankiins. 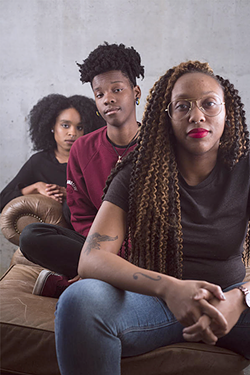 The bandmates said they are excited for the opportunity to play in an environment that was built for black musicians.

"I think that it's just going to feel kind of like we're at home and we can fit in," Ramikissoon said. "Not that we don't have to prove anything, but we can just get out there and have fun and we're all in an environment that we belong in."

Their song writing process is an open form of communication and experimentation, reaching across the table and asking what would happen if someone tried something else.

The band was featured on the Wells Fargo stage at Charlotte Pride in 2017, and they're also the trio is also the perfect fit for Bla/Alt.

You already know these guys, right? Alongside Amigo, they opened for Coolio and Judah & The Lion at CL's Taco Lucha Festival in September, and they've more than earned themselves a spot on Eden's Bla/Alt Festival. They've stormed the Charlotte music scene with funky basslines and driving drum beats. It's easy to see influences from the band members' favorite bands, Delta Spirit and The Strokes. Particularly in "Raygun Superstar" from the 2016 EP, Dirty Feelings, the opening guitar riff is reminiscent of The Strokes' rhythmic guitar. 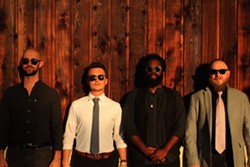 When I met with Nic Robinson, Hyatt Morrill and Connor Hausman at the Playroom on Tuckaseegee Road, they had just wrapped up with a Sunday morning practice. While they were laughing and cracking jokes, it was easy to see why they captivate an audience with a demanding presence.

After releasing a couple of recent singles and with tentative plans for a music video on the horizon, they band has evolved in its sound and plans to experiment with new, eel-like sounds.

"We're going to start doing different things a lot better. I think we're going to jump around with different sounds and just figure out where we fit best," said guitarist and vocalist Robinson. "Which we used to just go for this is a Business People song there you go. Now it's just more of, 'What do we want to play?'"

Rumur's first show was in February 2017 and since then, DJ Dan Wallace and bassist Rahsaan Lacey have been producing glitchy electronic tracks together.

Lacey was self-taught before going to Berklee College of Music, where he learned a multitude of musical styles like Latin and jazz.

With Wallace, the two of them act like producers for one another, giving advice and feeding off of each other's ideas and inputs until a song is created.

"We kind of just do whatever comes out and don't really question it," Lacey said. "It will evolve because we're getting better at making songs, and it'll evolve because we have different life experiences forming our work. It's always constantly changing it's just a matter of picking the best of it and putting it out there so it's all going to be a little bit different." 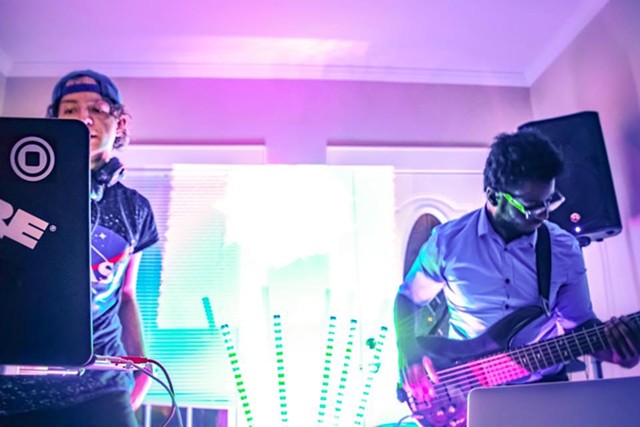 The band had a couple of different names that just didn't sit well with them, Nesbitt said. At one of their first shows, when the band name was announced, they immediately cringed.

It wasn't until one night, sitting on a porch and hanging out together, that someone said "Black Haus," and everyone was in agreement.

It's hard to pinpoint exactly what their genre of music is, as it's constantly changing from one track to the next.

"Describing our genre is weird because we're all differently inspired by stuff," Nesbitt said. "Our songs can have like a jazz or like R&B type feel. They really do change on every track because we do every genre. We do rock, we do punk we do funk, we'll do jazz. So it's just differences and changes."

Over the last year, Black Haus has matured and their style has changed. Nesbitt pointed out that while their first list of songs were more like pop and easy to remember, their tracklist now is dark and brooding, hitting the heartstrings with emotion.

"But I feel like now we've really matured, we're maturing as a group," he said. "It's really starting to change and I don't know if it's because of the different stuff we all have going on or just because of us playing for a longer time ... I feel like our sound has matured to the point where it's really moody, it's like gloomy."

He's a one-man band and experiments with sounds and feelings, exploring past relationships in his music. Charles Ovett throws himself into songwriting with no real process. And it works; his avant garde, lo-fi and grunge-y sound brings listeners in to the deeper side of this solo project.

Currently, he has a future album lined up that will be made from beats that an old friend of his makes. Every month, he receives about three to five experimental beats and plans to compile them into an album to release soon.

They're more glitch-y, he described. Much like his 2016 release, Short Cuts EP.

Now, Ovett, who's also plays as drummer in the experimental krautrock duo Joules, said he's less angry than when he first started out as Dallas Thrasher.

"I've mellowed out a lot. When that first album came out I think I was a little bit angry, it was really aggressive, too overbearing, I guess," he said. "Over the years I mellowed out and I'm like, 'I got all that out now and I'm good, I'm in my groove now.'"

For live performances, Ovett is high-energy, so don't expect to much of that mellow when he plays at Bla/Alt Festival. 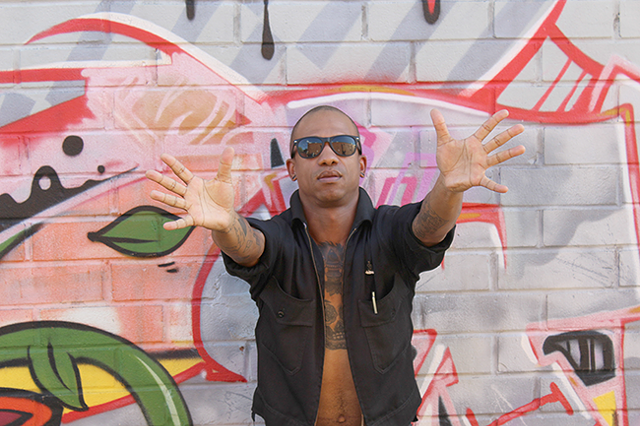 KANG hasn't been an active band in the community for some time, but when the crew was offered a spot on the festival line up, they got the gang back together for a reunion show. In the meantime, the band has played a couple shows at Oso Skate Park to shake the rust off.

Like many of the bands playing at Bla/Alt Festival, they don't conform to any label and would rather just go with the flow of the music.

"We don't try to play to a certain genre or an audience, we play parts that we feel like playing in the moment and then make it work together," Tekola said.

At the People's Market in Dilworth on a recent day, the group met up and cracked jokes about each other, laughing playfully about their experience in the band and playing music. 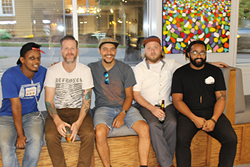 "We wanna make good music and we do care what the audience thinks but we don't care. I've had people walk out of my shows," Tekola chuckled. "I'll just say some inflammatory shit and people will just walk out, that's kind of the highlight. People just walking out because I said believing in Spiderman is more plausible than believing in Jesus."

But to Tekola, festivals like this are important, and he believes in speaking out about identity politics in America. As he pointed out, for the most part, white males can straddle different identities, while he feels that black or brown people cannot.

At Bla/Alt Fest, Tekola and the rest of KANG get to be individuals within their indescribable music genre and don't have to stick to a certain stereotype.

Armed with honey-sweet vocals and just a guitar, Keenan Jenkins takes the stage as XOXOK. He began his musical career in middle school, playing clarinet and always fighting for first chair. When he went to a boarding school in Durham, his roommate had a guitar that he would pick up and play on, thus beginning his career as a guitarist. 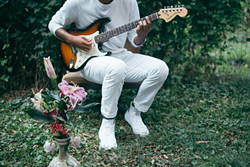 The influences of Frank Ocean and James Blake come through his music as the lyrics flow from his lips and his guitar rings true in tune with his vocals.

"I think to thing that I'm always trying to imitate them and be exactly what they are but I know that I cannot be what they are," Jenkins said.

"Somewhere along the line when I'm failing to be them, I have found my own way and found my own unique style somewhere in that failure."