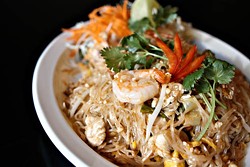 When Juliet imploringly asks, "What's in a name?" the answer should have been, "Plenty." True, a guy like Romeo might have developed the same qualities if his name were, say, Seymour — or would he? Parents spend a lot of time deciding on the names of the children. Restaurateurs do as well. The right name can make or break a restaurant. I'm sure we all remember Plan B, the ill-conceived name of a now defunct restaurant on East Boulevard.

This brings me to Blue Thai Basil, a restaurant which opened last March in The Shoppes at Blakeney. Blue Thai Basil is the creation of Rick Taing, who is also co-owner of Charlotte's Sushi 101 concept, and the product of a restaurateur family in Rock Hill. If the name Blue Thai Basil sounds familiar, it is. Charlotte already has a Blue restaurant. Alex Myrick's Blue Restaurant & Bar has charmed jazz lovers and fans of Chef Gene Briggs in Uptown Charlotte for years. Charlotte also has Blue Taj in Ballantyne, and Blu Basil Café, a fast casual spot in Cotswold. Last year, Basil Thai Cuisine, a second location for a Charleston restaurant group, opened Uptown. And then there is Basil's Restaurant, which has been operating on Old Pineville Road for over 20 years. So if some people are confused by the name of this new restaurant, I don't blame them. I say enough. Let's agree to retire the names "blue" (with or without the "e") and "basil."

The basis of Thai cuisine is the balance of the classic five tastes — sweet, salty, bitter, sour and unami (savory), plus piquancy (heat). Each dish should be harmonious. But a savvy restaurateur may say screw the rules. Throw in a grilled New York Strip on romaine with mint, cilantro, tomatoes, and chili powder, or even a fried rice dish. Thus, the menu at Blue Thai Basil is edited. This roster features the commonly found Thai dishes, including Tom Yum Kung soup, curries, noodles, and, of course, Pad Thai, but other Asian dishes appear as well.

Larb, which is usually classified as a salad on most menus, is on this menu as a starter. A native Laotian dish, this ground chicken is modestly dabbed with fish sauce, mint, scallions and rice, but is not a full-throated lusty version. Although this starter strikes the right balance of flavors, it is a paler version of itself. When wrapped in a cabbage leaf, more snap is required.

On the other hand, the Pad Thai, often a prosaic dish, pairs pan-fried noodles happily with thin slices of chicken and medium-sized shrimp. A balanced hand on the tamarind sauce achieves a more polished finish. All that is needed is a spritz of lime. The signature duck dish with generous cuts of fried duck bathing in an aromatic fiery red curry is so much better, though. Mmm, mmm. On the milder side is the three flavored shrimp — the three flavors are sweet, hot and sour, but again the heat is restrained, leaving the dish off kilter. However, this dish does offer a choice for those who prefer mild.

But should Thai dishes ever be mild? Wine drinkers would conclude yes. Heat seekers would say no. Is being familiar a fault or an attribute? In this economic climate, the smart money is on staying alive, which Taing has a knack for doing.