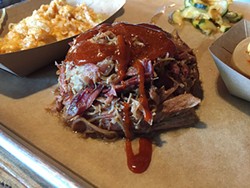 On a blustery January day, I hopped out of the car to peer into the expansive windows of the space that had been a nearly windowless photography lab for decades. The interior design features were rustic wood and corrugated metal siding. The look: urban industrial, but in a southern, almost Cajun or Texas honky-tonk way, without the kitsch. In fact, the overall design shouted beer.

When husband and wife team Tim Chun and Lisa Kamura opened Seoul Food Meat Co two months ago, customers were ready. But as our server explained, "There was confusion. Some thought it was a Korean restaurant. Others thought it was a meat [butcher] shop." This, of course, is understandable when the name has the words "Seoul" and "Meat Co" in it. But, as the name hints, Seoul Food is more soul food than bulgogi.

Once you navigate your way inside the welcoming expanse of the dining room, you'll find many satisfying totems of the southern barbecue experience: a limited menu, lots of wet wipes, and copious amounts of foods. The "meats," or main courses, are offered in small and large portions. The pulled pork and enormous beef ribs are marinated then smoked, and served family style in brown paper food containers on large metal trays. Other meats, like the chicken or tilapia, are fried in rice bran oil. The slightly curled whole fish arrives tableside with protruding lips and upright in a natural history exhibit manner. A spicy sauce bathes the crispy exterior. But the simpler pleasures tend to be the best at Seoul Food and, thus, the pulled pork is the favorite and quickly devoured.

Sides are what you would expect in a barbecue joint with a Korean drawl. Korean red pepper features prominently in the bowl of kimchi slaw. The all-star college dorm classic (can we really mix these together?) ramen mac-and-cheese is curiously monotone. Other pre-meat apps include a trio of brown deviled eggs, the color resulting from the soy marinade. The egg whites are made firmer by the soy, but the filling begs for a splash of Sriracha. The wings — chicken or tofu with soy garlic or lip-scalding barbecue sauce — are Korean-style thick-coated. You'll need a knife.

But this is where the beer comes in. These dishes are the perfect pairings for beer and Seoul Food has a list. Among the locals are Olde Mecklenburg Brewery, Unknown Brewing Co., Triple C Brewing Company, Sycamore Brewing, and Birdsong Brewing Co. The roster also features Asian craft beers, draft beers, sake, soju, cocktails, and a limited selection of wines.

The food is presented by a cheery service team dressed in company T-shirts. And in the grand tradition of lengthy-bar-list restaurants everywhere, the best seats in the house may be at the bar itself. The amount of food, however, almost requires a table for easy sharing.